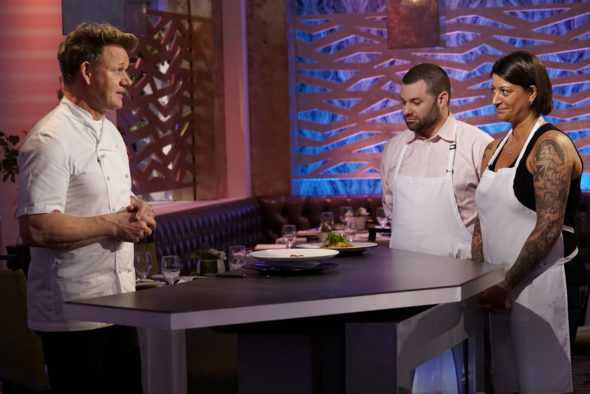 Is Chef Ramsay still cooking? Has the Hell’s Kitchen TV show been cancelled or renewed for an 19th season on FOX? The television vulture is watching for the latest cancellation and renewal news, so this page is the place to track the status of Hell’s Kitchen, season 19. Bookmark it, or subscribe for the latest updates. Remember, the television vulture is watching your shows. Are you?

A FOX reality TV series cooking competition, Hell’s Kitchen is hosted by Gordon Ramsay. The 18th season pits veteran contestants against rookies, with eight losing competitors returning to square off against eight newbies. At stake is a Head Chef position at the Gordon Ramsay Hell’s Kitchen Restaurant at Caesars Palace Las Vegas and a cash prize of $250,000.00.

The 18th season of Hell’s Kitchen averaged a 0.78 rating in the 18-49 demographic and 2.78 million viewers. Compared to season 17, that’s down by 10% in the demo and down by 11% in viewership. Find out how Hell’s Kitchen stacks up against the other FOX TV shows.

Will FOX cancel or renew Hell’s Kitchen for season 19? I think it will get a renewal, provided all parties can come to terms. I’ll keep an eye on the Nielsens and update this page with breaking developments. Subscribe for free updates on any Hell’s Kitchen cancellation and renewal news.

2/8/19 update: Ramsay has indicated that Hell’s Kitchen has been renewed for another season.

What do you think? Are you glad that the Hell’s Kitchen TV show has been renewed for a 19th season? How would you feel if FOX had cancelled this TV series, instead?

Glad its back. I enjoy the show.

LOVE LOVE LOVE ME SOME HELL’S KITCHEN!! MY FAVORITE THING TO WATCH ❤❤