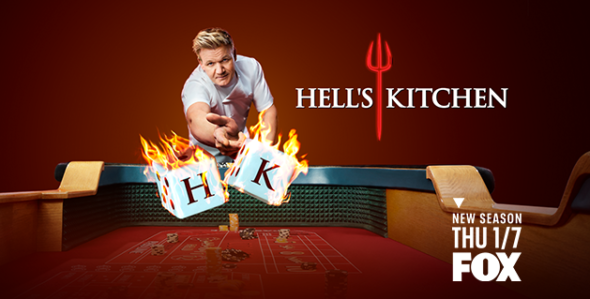 Though Hell’s Kitchen has been off the air for two years, we don’t have to worry about the show being cancelled right now. FOX has already renewed the series for a 20th season. Have viewers forgotten about the show or, will the ratings see a boost because fans have been craving its return? Stay tuned.

The Hell’s Kitchen cooking competition is hosted by Gordon Ramsay. The 19th season sees the series move to Caesars Palace Las Vegas for the first time (due to the pandemic). Ramsay puts 16 aspiring chefs from around the country through their paces before a winner is named. At stake is a Head Chef position at the Gordon Ramsay Hell’s Kitchen Restaurant in Caesers Palace and a cash prize of $250,000.

4/23 update: You can see the latest night’s ratings in context.

For comparisons: Season 18 of Hell’s Kitchen on FOX (which aired two years ago) averaged a 0.78 rating in the 18-49 demographic and 2.78 million viewers.

What do you think? Do you like the Hell’s Kitchen TV series on FOX? Should it be cancelled or renewed for a 20th season?