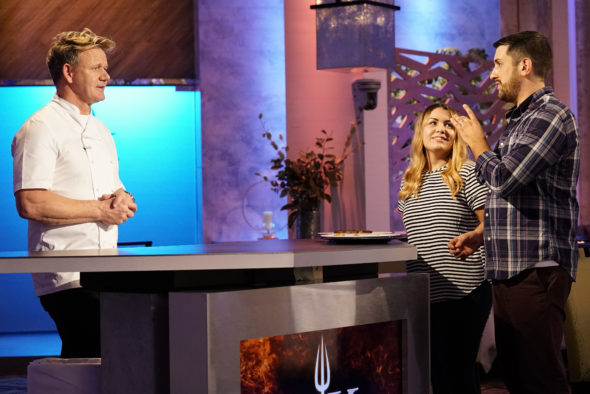 Is Chef Gordon Ramsay’s partnership with FOX still a hot property? Has the Hell’s Kitchen TV show been cancelled or renewed for an 18th season on FOX? The television vulture is watching for the latest cancellation and renewal news, so this page is the place to track the status of Hell’s Kitchen, season 18. Bookmark it, or subscribe for the latest updates. Remember, the television vulture is watching your shows. Are you?

A reality series airing on the FOX television network, Hell’s Kitchen is a cooking competition, hosted by Gordon Ramsay. Season 17 is an all-star edition, featuring 16 past competitors. This time out, they’re vying for a Head Chef position at the Gordon Ramsay Hell’s Kitchen Restaurant at Caesars Palace Las Vegas.

The 17th season of Hell’s Kitchen averaged a 0.86 rating in the 18-49 demographic and 3.13 million viewers. Compared to season 16, that’s down by 21% and down by 10%, respectively. Find out how Hell’s Kitchen stacks up against the other FOX TV shows.

Fans shouldn’t have to spend time wondering if FOX will cancel or renew Hell’s Kitchen. The network picked up the 18th season, back in September of 2016. Still, even renewals can be cancelled, so subscribe for free updates on any Hell’s Kitchen cancellation and renewal news.

What do you think? Do you hope the Hell’s Kitchen TV show will be renewed for an 18th season? How would you feel if FOX cancelled this TV series, instead?

I love this show.Don’t watch alot of TV but this is one worth watching please bring it back.

Please dont cancel the show. Im not on it but i watch and learn . And love the show

PLEASE, PLEASE, PLEASE DO NOT CANCEL HELL’S KITCHEN! I HAVE BEEN A FAN SINCE THE VERY BEGINNING AS WELL AS MILLIONS OF OTHER PEOPLE HAVE BEEN. IT WILL BE A HUGE DISAPPOINTMENT IF YOU CANCEL THIS SHOW. I’M CONFIDENT THAT I SPEAK FOR THE MILLIONS WHO FAITHFULLY WATCHED THIS SHOW BUT ARE NOT AWARE THAT THEY CAN VOICE THEIR OPINION ABOUT KEEPING THE SHOW RUNNING!

Absolutely love Hell’s Kitchen have watched it from the very beginning, I am not ready for it to end,