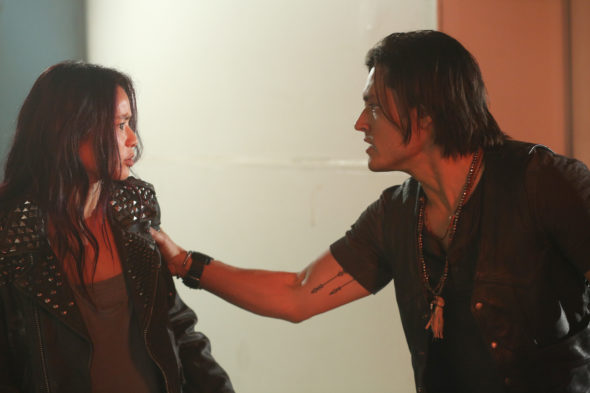 Is the Strucker family safe? Has The Gifted TV show been cancelled or renewed for a second season on FOX? The television vulture is watching all the latest cancellation and renewal news, so this page is the place to track the status of The Gifted, season two. Bookmark it, or subscribe for the latest updates. Remember, the television vulture is watching your shows. Are you?

The first season of The Gifted averaged a 1.00 rating in the 18-49 demographic and 3.31 million viewers. Find out how The Gifted stacks up against the other FOX TV shows.

Although it premiered with positive numbers, the digits dipped quickly. The ratings seems to have stabilized now. FOX has a lot of challenges in the ratings department right now and the network needs new shows. So, as a result, I suspect that the execs will renew this series for a second season. I’ll keep an eye on the Nielsens and update this page with breaking developments. Subscribe for free updates on The Gifted cancellation or renewal news.

1/4/ update: The Gifted is renewed for season two on FOX. Details here.


What do you think? Do you hope The Gifted TV show will be renewed for a second season? How would you feel if FOX cancelled this TV series, instead?

i hope we get to see a whole lot more of the gifted i love watching it all watch it or all record it and watch it later on..

I would love SEASON TWO, also. It is a great show. I watched every show in SEASON ONE. The Gifted has great characters. IT is a awesome show. Please bring it back on TV,

The show is great and deserves another season, personally I would love to see what happens next

Against all odds FOX announced today that ‘The Gifted’ would be returning for Second Season ahead of the Season One Finale!

I love the show. Love the mentions of actual Xmen and the possibility that Xmen could appear at some point in later seasons, but I’m so frustrated at the wait between episode 10 (Dec 11) and 11 (Jan 1) then another 2 week wait for the 2 episode season finale. It’s ridiculous!

Definitely serious 2 I absolutely love it!!!

The gifted HAS to be renewed for season 2. Compelling watching

Yes! Season 2 please! We absolutely love this show. We always record and watch a couple at a time. We are now chomping at the bit for January!!