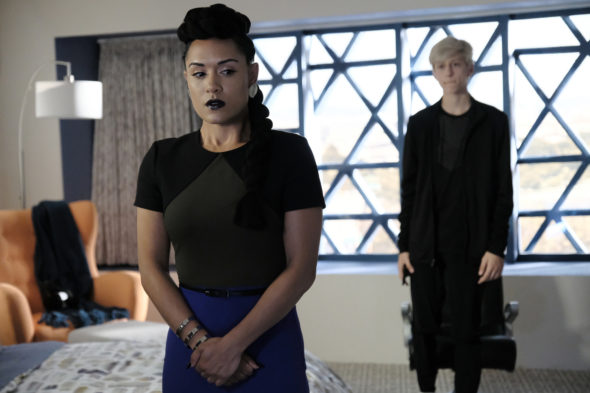 The Gifted is nearing the end of its second season, but will there be a third? Recently, creator Matt Nix spoke with SlashFilm about the future of the FOX TV show.

FOX has not announced a season three renewal for The Gifted, but creator Matt Nix thinks if the show does return, it may be on streaming:

I think that my sense is that the most likely thing is that if we come back, we’ll come back in some sort of creative way. Some partnership, because I think what we’ve discovered is that fans of The Gifted are big fans of The Gifted. We have a solid fan base and it’s a little small for the broadcast networks. But we do well on streaming so there may be, my hope is that there’s something to work out in that realm.”

And what can fans expect from the show’s season two finale? Star Emma Dumont told TVLine there’s a huge cliffhanger:

The season two finale of The Gifted debuts on FOX tonight, February 26th, at 9 p.m. ET/PT.

What do you think? Do you watch The Gifted? Do you want a third season?

Yes there should be 5 more seasons of this great Sci Fi. I watched both 1 and 2 off of Hulu and you should just stream them off of there again. I like all the Marvel shows and movies, I think this is my all time favorite.

Yes Dear God and Producers PLEASE COME BACK! I think if not on broadcast network definitely on streaming! Please the show is amazing there is nothing like it on TV. Executives! Dont disregard the fans the show has just bc you’re not getting the ratings or numbers you want! We need a show like this on TV. Please dont cancel.

You absolutely can’t leave us hanging, there’s so many possibilities and directions this could go. I work two jobs so I watch it on Hulu, usually on the weekends. My daughter and I watch it together and we’re both huge fans.

Amazing first season, haven’t watched past the first episode of season two yet. I plan to, but in no rush due to immense quality drop

Please renew i love this show

I love this show and would like to see it return for a third season.

I absolutely LOVE this show! Please bring it back for a 3rd season. The season 2 cliffhanger was awesome! I was hoping they brought het back. Not sure how they will move forward without the dad though.

Loveee the show! ♥ Please renew!! For at least 10more seasons!

One of only a few television shows worth watching. Please renew for a third season. It just keeps getting ether and better.

Excellent show! Please renew for more seasons!?! That’s plural meaning lots of seasons. At the end of each year more of the good series are being cancelled & replaced with junk shows. Like reality shows of peoples family drama. Who in their right mind wants to watch a show that’s nothing but arguing, fighting & people cheating on their spouses. It’s just crazy in my opinion!

Yes I love the show and it should stay on Fox