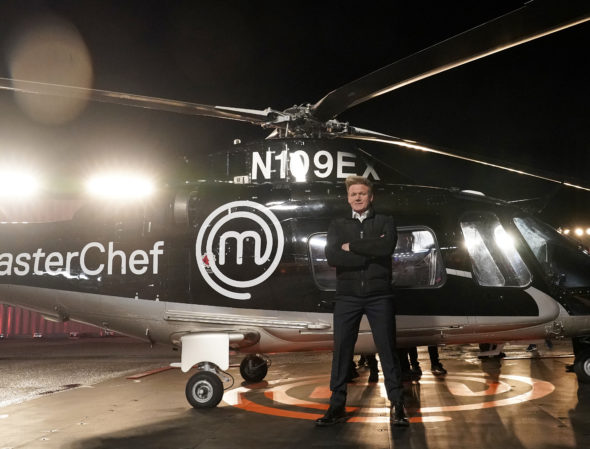 Will the kitchen stay open? Has the MasterChef TV show been cancelled or renewed for an 11th season on FOX? The television vulture is watching for the latest cancellation and renewal news, so this page is the place to track the status of MasterChef, season 11. Bookmark it, or subscribe for the latest updates. Remember, the television vulture is watching your shows. Are you?

A FOX cooking competition, MasterChef features talented home cooks battling for the title and the grand prize of $250,000.00. Chef Aarón Sánchez, Joe Bastianich and host-chef Gordon Ramsay have all returned to the season 10 judging panel. In addition to the usual elimination and tag team challenges, this time out the competing cooks are catering a former MasterChef winner’s wedding reception. For the restaurant takeover they are traveling to England to take over Ramsay’s flagship London restaurant, Restaurant Gordon Ramsay.

The 10th season of MasterChef on FOX averaged a 0.76 rating in the 18-49 demographic and 3.05 million viewers. Compared to season nine, that’s down by 24% and 13%, respectively. Find out how MasterChef stacks up against the other FOX TV shows.

Will FOX cancel or renew MasterChef for season 11? This series has to end at some point but I don’t see MasterChef being cancelled anytime soon. I’ll keep an eye on the Nielsens and update this page as the season progresses. Subscribe for free MasterChef cancellation and renewal alerts.

8/6/19 update: Casting is underway for season 11 of MasterChef on FOX.

What do you think? Are you glad that the MasterChef TV series has been renewed for an 11th season? How would you feel if FOX had cancelled this TV show, instead?

I watch all of chef Ramseys cooking shows I just

I just watched master chef,Dorien won chef Ramsey is always fair when it comes to choosing the best cook,thats what matters to him.I watch all of his cooking shows ,I also watch the ones where he help people save their restaurants.I love and respect you Chef Gordon Ramsey and you have a gorgeous family. you’ve got a good heart.

Subha is going to be out not this coming week but next one.

I have watched since season 1. It is one of my favorite shows. I hope it is renewed.