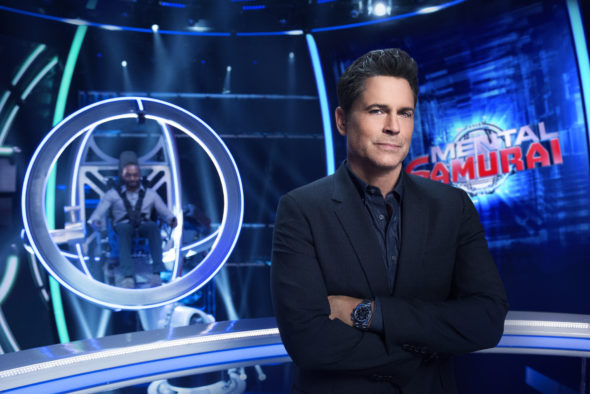 Will the battle continue? Has the Mental Samurai TV show been cancelled or renewed for a second season on FOX? The television vulture is watching for the latest cancellation and renewal news, so this page is the place to track the status of Mental Samurai, season two. Bookmark it, or subscribe for the latest updates. Remember, the television vulture is watching your shows. Are you?

A FOX game show billed as an obstacle course for the mind, Mental Samurai is hosted by Rob Lowe, who also serves as a producer. Not only do the competitors have to quickly and correctly answer questions which draw on their overall knowledge, memory, and ability with puzzles, numbers and sequences, they play the game while inside a capsule which zooms around the set, and can rotate 360 degrees. In addition to testing their focus and skills, it is also meant to try their stamina.

The first season of Mental Samurai on FOX averaged a 0.52 rating in the 18-49 demographic and 1.77 million viewers. Find out how Mental Samurai stacks up against the other FOX TV shows.

Will FOX cancel or renew Mental Samurai for season two? The ratings have been terrible right from the start so I think it will be cancelled. I’ll update this page with breaking developments. Subscribe for free Mental Samurai cancellation and renewal alerts.

2/26/20 update: Mental Samurai has been renewed for season two.

What do you think? Are you glad that the Mental Samurai TV show has been renewed for a second season? How would you feel if FOX had cancelled this TV series, instead?

Anyone know know when season 2 starts it said it would air 3 days ago so I just now try to find it and it not up yet. Was wondering if anyone heard when it will be on. I know it probably has to do with the virus going around push back the casting on something on those lined

I don’t know when Mental Samurai season two will be airing, but I’ll keep you updated with any news on the show premiering

I’m pleased to say that Mental Samurai premiers May 25th for season two, it took them long enough to finally announce a date for the season, I’m so excited for the show to come back

I’m very mad because they aren’t airing the second season of mental samurai , they’re repeating the first season, they need to start airing the new season not the old, if you agree on what I say please reply on this post

I agree My 12 year old son loves this show. He also loves Game Of Talents. We would like to see both seasons of both 🙂

Would be very disappointed if this show was canceled. My daughter (14) and watched this together. Actually when we discovered this show we were able to binge watch the whole season. We have been waiting anxiously for new shows. I love Rob Lowe hosting . Please Rob bring us more delightful and educational entertainment.

It is finally been renewed and it’s starts April 22nd, also there is casting for season two

What’s taking fox so long to make a decision to renew the show, I hope it’s gets renewed for season two, they should do nationwide auditions for the show and see who right for the show

Please renew Mental Samurai! It’s so engaging! It is the perfect platform for contestants to showcase their knowledge & their love of adventure. It’s such a great show for thrill seekers. Although I must say the show’s greatest asset is having the world’s most beautiful man as its host; Rob Lowe! We have the gift of watching him…in all his splendor!

Please renew the Mental Samurai. I loved the game better than others I’ve watched in the past.

Please renew mental samurai. It’s the best game show ever, and so addicting. I love it!!

PLEASE renew it, love this show!!!

Various categories that just about everyone can participate in!!!

Mental Samurai should be renewed. It’s the only game show other than Millionaire that actually requires the contestants to have knowledge and not just giving a lucky guess. Please bring it back for a 2nd season and give the ratings another chance.