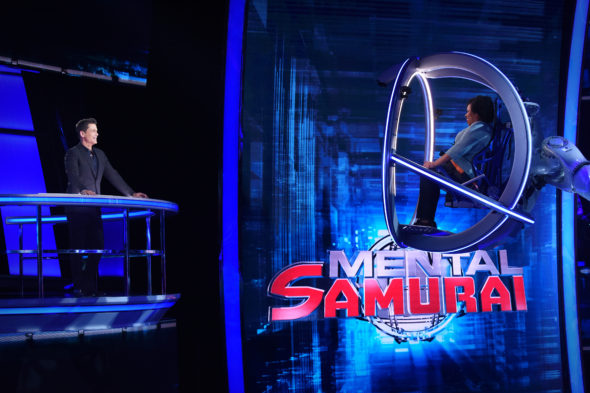 Is the first season of the Mental Samurai TV show on FOX a winner in your book? As we all know, the Nielsen ratings typically play a big role in determining whether a TV show like Mental Samurai is cancelled or renewed for season two. Unfortunately, most of us do not live in Nielsen households. Because many viewers feel frustration when their viewing habits and opinions aren’t considered, we’d like to offer you the chance to rate all of the Mental Samurai season one episodes here. *Status update below.

A FOX game show billed as an obstacle course for the mind, Mental Samurai is hosted by Rob Lowe, who also serves as a producer. Not only do the competitors have to quickly and correctly answer questions which draw on their overall knowledge, memory, and ability with puzzles, numbers and sequences, they play the game while inside a capsule which zooms around the set, and can rotate 360 degrees. In addition to testing their focus and skills, it is also meant to try their stamina.

What do you think? Which season one episodes of the Mental Samurai TV series do you rate as wonderful, terrible, or somewhere between? Should FOX cancel or renew Mental Samurai for a second season? Don’t forget to vote, and share your thoughts, below.

*2/26/20 update: Mental Samurai has been renewed for season two.

I LOVE THIS GAME. ANYONE CAN PLAY TO BECOME A MENTAL SAMAURI. YOU DON’T HAVE TO BE A GENIUS. IN FACT, THEY DIDN’T DO SO WELL

I LOVE THIS SHOW! ANYONE CAN PLAY AND DO WELL.

The FBI Show is Reality and Hopeful to Our Country!

One of the BEST Shows ever on TV…..Reality and Hope for America!

Mental Samurai Was Awesome Game Show to watch, I just wish they had less commercials so have time for more contestants to be on the show, I would love to tryout for next season if it happens , Rob Lowe Did an amazing job hosting that show, I had no idea that he was a fellow Ohio State buckeye before the show aired on Fox.