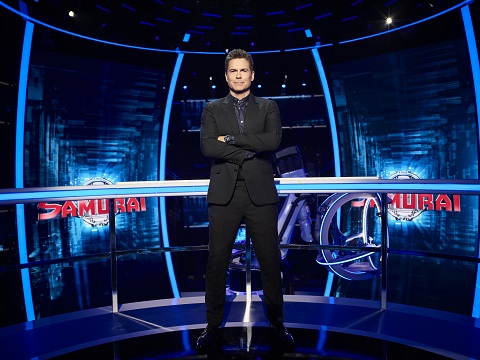 FOX is moving things around a little bit. Today, the network announced they have postponed the premiere date for season seven of MasterChef Junior and the new TV show Mental Samurai.

Hosted by Rob Lowe, Mental Samurai tests players “acumen in categories of knowledge, memory, puzzles and sequencing, but players will also have to contend with being physically transported around the set at high speeds in a specially designed capsule capable of rotating 360 degrees.”

Season seven of MasterChef Junior will now premiere on FOX on March 5th at 8 p.m. ET/PT, followed by the debut of Mental Samurai at 9 p.m. ET/PT.

Each episode of MENTAL SAMURAI is an epic television event, as contestants battle the boundaries of their minds to answer questions accurately with speed and precision. Not only does the course test their acumen in categories of knowledge, memory, puzzles and sequencing, but players will also have to contend with being physically transported around the set at high speeds in a specially designed capsule capable of rotating 360 degrees. In MENTAL SAMURAI, people from all walks of life will compete, and underdogs will triumph, in the game that anyone can play, and almost no one can win.

MENTAL SAMURAI follows the return of hit culinary competition series MASTERCHEF JUNIOR (8:00-9:00 PM ET/PT). Entering its seventh season, the series gives talented kids between the ages of 8 and 13 the chance to showcase their culinary abilities and passion for food through a series of delicious challenges. Award-winning chef Gordon Ramsay and renowned pastry chef Christina Tosi will be joined by celebrated chef and restaurateur Aarón Sánchez on the judges’ panel. Season Seven will showcase a mystery box challenge focusing on the most important meal of the day – breakfast. Additionally, the young chef-testants will attend and prepare a meal for 51 circus performers, create a restaurant-quality fish dish, compete to see which team can first roll out a perfect sheet of pasta to 24 feet and power through the fan-favorite restaurant takeover challenge, until one talented kid is named America’s newest MASTERCHEF JUNIOR, taking home the MASTERCHEF JUNIOR trophy and $100,000 grand prize.

MASTERCHEF JUNIOR is produced by Endemol Shine North America and One Potato Two Potato, and is based on a format created by Franc Roddam and Endemol Shine. Robin Ashbrook, Danny Schrader, Elisabeth Murdoch, Georgie Hurford-Jones, Gordon Ramsay, Yasmin Shackleton, Patricia Llewellyn and Ben Adler serve as executive producers. “Like” MASTERCHEF JUNIOR on Facebook at facebook.com/MasterChefJuniorFOX. Follow the series on Twitter @MasterChefJrFOX and join the discussion at #MasterChefJunior. Check out photos and videos on Instagram @masterchefjunior/.”

What do you think? Are you a fan of MasterChef Junior? Will you check out Mental Samurai?