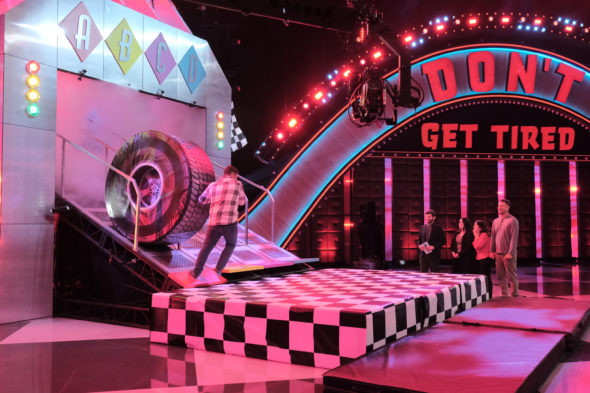 How many viewers will “want” to tune in to watch the first season of the Don’t TV show on ABC? As we all know, the Nielsen ratings typically play a big role in determining whether a TV show like Don’t is cancelled or renewed for season two. Unfortunately, most of us do not live in Nielsen households. Because many viewers feel frustrated when their viewing habits and opinions aren’t considered, we invite you to rate all of the first season episodes of Don’t here.  *Status Update Below.

An ABC comedy game show, A comedic physical game show, the Don’t TV series is hosted by Adam Scott and executive produced by Ryan Reynolds (who also provides his voice for the series). The series offers contestants the opportunity to team up with their family and friends for the chance to win a cash prize of up to $100,000. Together, they tackle crazy tasks, each with the simple rule: “DON’T.” In each episode, members of a four-person team strive to accomplish various “Don’t” challenges — like “Don’t Blink,” “Don’t Look Back,” “Don’t Scream,” and “Don’t Play Ball in the House” — as they work together to build their bank. If they fail a challenge, the team doesn’t earn money and instead suffers ridiculous consequences.

What do you think? Which season one episodes of the Don’t TV series do you rate as wonderful, terrible, or somewhere between? Do you think that Don’t should be cancelled or renewed for a second season on ABC? Don’t forget to vote, and share your thoughts, below.

Please DON’T keep this on the air… It’s juvenile & just plain awful. You cancel great family shows & keep trying to get us to accept this nonsense!

I watched the first episode of Don’t and really enjoyed it. I thought it was a fun, entertaining show for the whole family.