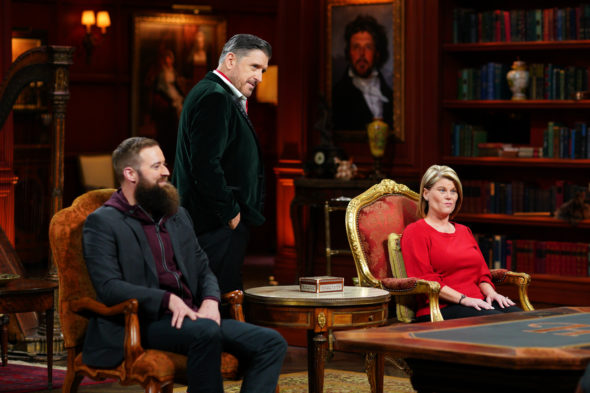 How often will the player with the secret win in the first season of The Hustler TV show on ABC? As we all know, the Nielsen ratings typically play a big role in determining whether a TV show like The Hustler is cancelled or renewed for season two. Unfortunately, most of us do not live in Nielsen households. Because many viewers feel frustration when their viewing habits and opinions aren’t considered, we invite you to rate all of the first season episodes of The Hustler here. *Status Update Below.

An ABC game show, The Hustler TV series is hosted by Craig Ferguson. Each episode of the show follows five contestants as they collaborate to correctly answer a series of 10 trivia questions that are worth $10,000 each. Their goal is to build the amount of money in a collective prize pot that grows with each correct answer. The catch is that one of the five contestants, aka the Hustler, already knows the correct answers because of their personal experiences or interests. Throughout each episode, two contestants are anonymously eliminated by the Hustler. The remaining three players must collectively decide which one of them is the secret Hustler. If the two regular contestants are correct, they split the prize pot that could be worth over $100,000. If the two are wrong, the Hustler takes home the full cash reward.

What do you think? Which season one episodes of The Hustler TV series do you rate as wonderful, terrible, or somewhere between? Do you think that The Hustler should be cancelled or renewed for a second season on ABC? Don’t forget to vote, and share your thoughts, below.

My wife, my Dad, sister, and friends all LOVE “The Hustler.” Please keep it on the air. It’s sad that there is not nearly enough quality programming on TV today. This program is a throwback to a better time in the history of television.

I’m so excited to see this show come back. I really enjoyed watching and trying to figure out who was the hustler. It reminds me of the game I played so many times growing up and also with my children called “Clue”. I hope it continues for many seasons to come. I also enjoy watching Craig Ferguson I miss his late night show. Funny man!!

Love love The Hustler!! So glad it is coming back. Good wholesome family fun! Craig Ferguson is the perfect host for the show.

Thanks for renewing The Hustler Great game show!!!! Love it!

My husband and I loved this show. It was so much fun to play along. Please renew it.

Our household LOVES this show – and Craig Ferguson! It is very unique and engaging.

I.love this show. It’s different than any other. We get to play along. Mr. Ferguson is engaging as always. PLEASE BRING IT BACK!

My husband and I BOTH LOVE THIS SHOW! It is a WINNER!

Please bring back the tv show The Hustler

Pleeease bring this show back! We love this show! It’s bringing my family together to watch a quality tv show again!

Please bring it back. 6 people(myself included) love the show!

Love this show bring it back.

Love this show. My brother, sister and myself play it together. We guess who the hustler is. We keep track and the winner gets lunch. I love Craig Ferguson and miss him. Glad to see him back.

Bring back Hustler-so much fun!