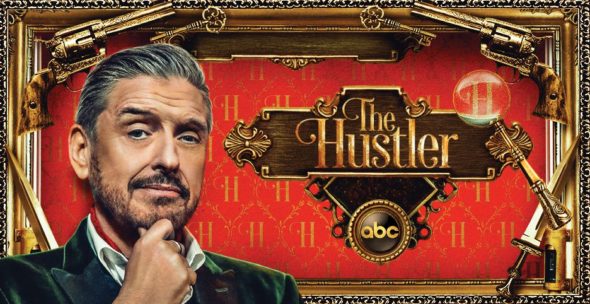 ABC has found some moderate success by reviving a slew of classic game shows. Now, the network has introduced an original one called The Hustler. Will it draw high enough ratings to stick around? Will The Hustler be cancelled or renewed for season two? Stay tuned. *Status Update Below.

A trivia game show, The Hustler TV series is hosted by Craig Ferguson. Each episode of the show follows five contestants as they collaborate to correctly answer a series of 10 trivia questions that are worth $10,000 each. Their goal is to build the amount of money in a collective prize pot that grows with each correct answer. The catch is that one of the five contestants, aka the Hustler, already knows the correct answers because of their personal experiences or interests. Throughout each episode, two contestants are anonymously eliminated by the Hustler. The remaining three players must collectively decide which one of them is the secret Hustler. If the two regular contestants are correct, they split the prize pot that could be worth over $100,000. If the two are wrong, the Hustler takes home the full cash reward.

2/26 update: You can see the latest night’s ratings in context.

What do you think? Do you like The Hustler TV series on ABC? Should it be cancelled or renewed for a second season?

Love it. Keep it going

Love this show, please renew The Hustler for season 2. I really enjoy it.

It’s a great show please keep it on!!

Loved this show! Craig is great!

Great show,great host…a cut above most game shows. Was disappointed it was such a short season

Please renew, it’s one of the best shows my wife and I have enjoyed for quite some time.

One of the best shows on TV! It is original, funny and intelligent.

One of the best shows on tv. So many shows are so depressing. This one is exceptional. Really enjoy it.