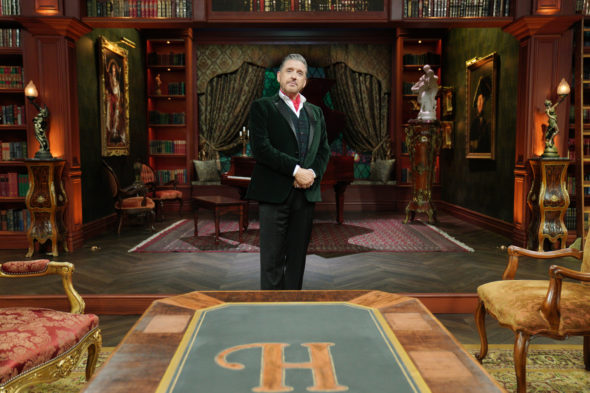 TV show description:
A game show, The Hustler TV series is an unusual trivia competition because, in the game, one player secretly already knows the answers. However, just because they have a leg up doesn’t mean they’ll be taking home the prize.

Each episode of the show follows five contestants as they collaborate to correctly answer a series of 10 trivia questions that are worth $10,000 each. Their goal is to build the amount of money in a collective prize pot that grows with each correct answer.

The catch is that one of the five contestants, aka the Hustler, already knows the correct answers because every question is inspired by his or her life and interests. They must keep their identity a secret from the others, however, in order to have a shot at winning the grand prize for themself.

Series Finale:
Episode #19 — A Little of This, A Little of That
Five new competitors join host Craig Ferguson in this mind-bending and enigmatic game show where coffee beans, sausage, and the Goo Goo Dolls are clues to discovering The Hustler.
First aired: September 23, 2021.

What do you think? Do you like The Hustler TV show? Do you think it should have been cancelled or renewed for a third season?

bring it back. Great show!

Please bring it back. It was a great show, and Craig was brilliant as always.

Loved the show. Bring back the Hustler

Please bring back the Hustler very Good game show. We miss it.

Pleas bring back the Hustler. It was so much fun to watch!!

I’m really challenged by The Hustler; rarely get it right (did finally get my first two wins the very last two shows of season 2). I enjoy it, rearrange my schedules to watch it live, and if I have to miss, always make sure to DVR it. I hope it gets renewed, it’s thoughtful and original.