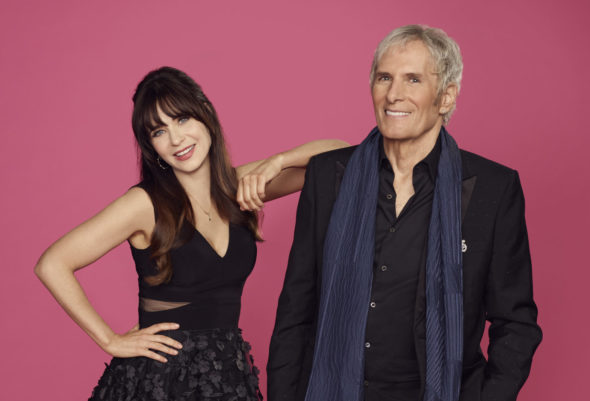 TV show description:
Based on The Dating Game, which first aired on ABC in 1965, The Celebrity Dating Game is hosted by actress Zooey Deschanel and singer-songwriter Michael Bolton.

The series is a modern take on the classic game show but this version features a roster of celebrity singles — from television, music, comedy, reality TV, and feature film — all trying to find love by interviewing unseen regular contestants.

Offering the same iconic feel as the original show, each episode follows two celebrities who each pick one lucky suitor from a hidden panel of three bachelors and/or bachelorettes based on answers to a variety of questions.

In a twist, the celebrity identities remain a mystery to their suitors, who are given clues via parody song performances by Bolton. Is there love in the air?

Series Finale:
Episode #8 — Joey Lawrence and Marcus Scribner
“Blossom” and “Brotherly Love” star Joey Lawrence enjoys good music and dancing on the first date. Joey asks the contestants what their ideal first date entails while Michael Bolton performs a hilarious version of “How Can We Be Lovers.” Meanwhile, “black-ish” actor Marcus Scribner challenges contestants to pretend they are on a reality television show and act out a confessional about how the date is going so far. Michael Bolton sings “Time, Love and Tenderness” to help the women identify Marcus.
First aired: August 16, 2021.

What do you think? Do you like The Celebrity Dating Game TV show? Do you think it should have been cancelled or renewed for a second season?

This show is a bust. Not entertaining at all. I only watched Hannah Brown’s segment and could not even begin to continue. Zoey was doing a lot of yelling (talking very loudly) she was not affective and Michael Bolton was not really engaged.