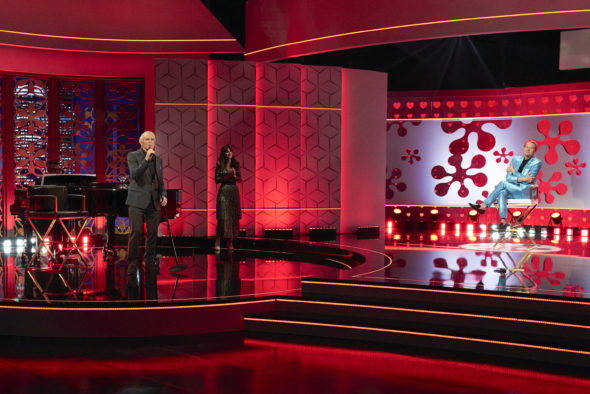 An ABC series, The Celebrity Dating Game is hosted by actress Zooey Deschanel and singer-songwriter Michael Bolton. The first season includes Hannah Brown, Nicole Byer, Carson Kressley, Iggy Azalea, Taye Diggs, and Demi Burnett. The series is a modern take on the classic game show but this version features a roster of celebrity singles all trying to find love. Offering the same iconic feel as the original, each episode follows two celebrities who each pick one lucky suitor from a hidden panel of three bachelors and/or bachelorettes based on answers to a variety of questions. In a twist, the celebrity identities remain a mystery to their suitors, who are given clues via parody song performances by Bolton. Is there love in the air?

*4/4/22 update: The Celebrity Dating Game has reportedly been cancelled by ABC.

Love the show, Love Michael Bolton and Zoey does a great job.

I’m upset that the ending is different and they don’t give any information on the date or what happened on the date! Also Michael Bolton sings great but he seems do bored and has no facial expressions

I really don’t like the show. Won’t be watching.

It was painful to watch, the host and hostess seemed awkward, and uncomfortable with the whole thing. They need a host like Steve Harvey, outgoing, sarcastic and funny, to lighten it up a bit..

Totally agree: awful, mega painful to watch! I didn’t even finish, erased the episode after the first few minutes!!!

Celebrity dating game is so lame, it’s the worst dating game, Hannah brown has been around and Michael Bolton acts like a clown. I couldn’t watch it till the end and I won’t be watching ever again

Michael Bolton looked like a living statue, so so sad to watch!!!

Zooey Deschanel should take voice lessons. Her voice is too high pitched to be the host of this show. My ears were literally hurting every time she talked I had to press the mute button several times throughout the show. I don’t want to put myself through that experience again.