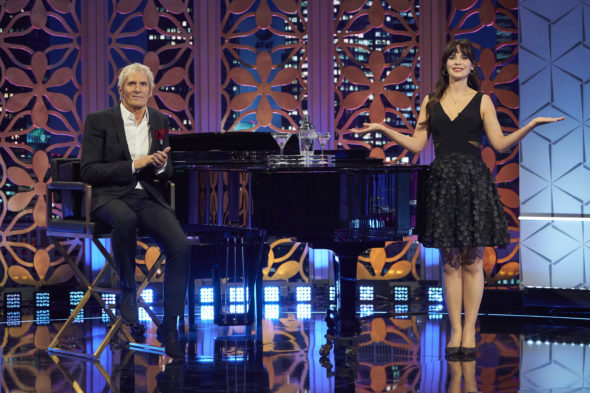 Do viewers love this revival? Has The Celebrity Dating Game TV show been cancelled or renewed for a second season on ABC? The television vulture is watching all the latest cancellation and renewal news, so this page is the place to track the status of The Celebrity Dating Game, season two. Bookmark it, or subscribe for the latest updates. Remember, the television vulture is watching your shows. Are you?

Airing on the ABC television network, The Celebrity Dating Game is hosted by actress Zooey Deschanel and singer-songwriter Michael Bolton. The first season includes Hannah Brown, Nicole Byer, Carson Kressley, Iggy Azalea, Taye Diggs, and Demi Burnett. The series is a modern take on the classic game show but this version features a roster of celebrity singles all trying to find love. Offering the same iconic feel as the original, each episode follows two celebrities who each pick one lucky suitor from a hidden panel of three bachelors and/or bachelorettes based on answers to a variety of questions. In a twist, the celebrity identities remain a mystery to their suitors, who are given clues via parody song performances by Bolton. Is there love in the air?

The first season of The Celebrity Dating Game averaged a 0.39 rating in the 18-49 demographic and 2.10 million viewers in the live+same day ratings (including DVR playback through 3:00 AM). While these numbers don’t include further delayed or streaming viewing, they are a very good indicator of how a show is performing, especially when compared to others on the same channel. Other economic factors can be involved in a show’s fate, but the higher-rated series are typically renewed and the lower-rated ones are cancelled. Find out how The Celebrity Dating Game stacks up against other ABC TV shows.

Will ABC cancel or renew The Celebrity Dating Game for season two? The network has a wide stable of game shows and they’ve become a staple of ABC’s summer schedule. This series fits well with the rest of the shows (some of which are getting a little long-in-the-tooth) so I’m leaning toward a renewal. I’ll update this page with breaking developments. Subscribe for free alerts on The Celebrity Dating Game cancellation or renewal news.

What do you think? Do you hope that The Celebrity Dating Game TV show will be renewed for a second season? How would you feel if ABC cancelled this TV series, instead?

Love the show love seeing who the celebrity’s contestants are

I watched the bachelorette & Celebrity dating game came on afterwards… I watched 3 or 4 episodes. SO BORING…The entire time Michael Bolton sits on a stool looking like a zombie…NO THANKS!!

This revived game show is the dumpster fire in the mix. It absolutely doesn’t need to be renewed – if it is, it’s stench runs the risk of burning down the others. Zoey is NOT the right fit. Despite her cute & awkward demeanor that totally works for a refreshing sitcom setting – on this show, it absolutely works against her. She comes off as incredibly uncomfortable, clueless and extremely unrehearsed. No clue where to look or how to engage. It’s PAINFUL to watch. Michael Bolton doesn’t even seem real – in the worst of ways. He comes off like… Read more »

Jim Lange must be rolling in his grave

Horrible! Always loved Michael Boltens’ music. Never knew he could be so boring and stiff. He looks like he got his whole body Botoxed. And what is with getting short not so good looking men and pairing them up with gorgeous tall women. The producers have got to be blind.

This show stinks. We would rather have a root canal done with no freezing. We didn’t watch the whole show.

Please, please do not renew this show! It was so stupid! I mildly liked the original show. The 2 hosts just don’t work well for the show. I’m sure most of it is the writing. Will not be watching it.