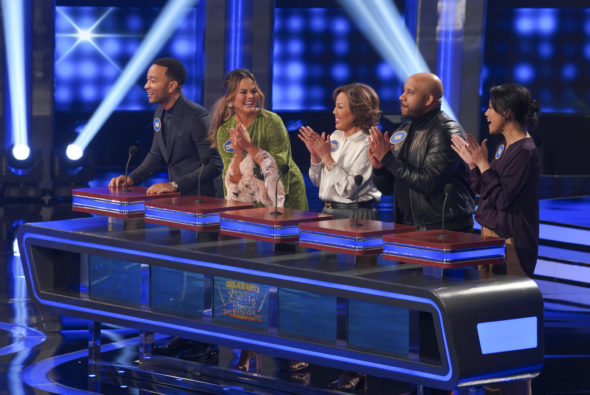 Will Steve Harvey and this venerable game show return? Has the Celebrity Family Feud TV show been cancelled or renewed for a sixth season on ABC? The television vulture is watching all the latest cancellation and renewal news, so this page is the place to track the status of Celebrity Family Feud, season six. Bookmark it, or subscribe for the latest updates. Remember, the television vulture is watching your shows. Are you?

An ABC game show, Celebrity Family Feud is hosted by Steve Harvey. Just as on the original Family Feud series, celebrities and their family and friends try to guess the most popular answers to opinion surveys. The difference is, they’re playing for up to $25,000 for charities. Celebrity family teams competing in season five include: Team Teigen/Legend vs. Team “Vanderpump Rules”; Team Terry Crews vs. Team Karamo Brown; Team Black-ish vs. The Goldbergs; and Team The Chainsmokers vs. Team 5 Seconds of Summer.

Will ABC cancel or renew Celebrity Family Feud for season six? ABC’s game show revivals have become a summer staple for the network and this one does pretty well. I think it will be renewed and will update this page with breaking developments. Subscribe for free alerts on Celebrity Family Feud cancellation or renewal news.

What do you think? Are you glad that the Celebrity Family Feud TV show has been renewed for a sixth season? How would you feel if ABC had cancelled this TV series, instead?

This is fantastic! Nobody does it like Steve Harvey! Bringing him back brings laughter into the home again. This is so needed today. Perfect timing. Good move!

Please renew Celebrity Family Feud, it’s my favorite game show ever. Steve Harvey is hilarious, and there’s no one funnier!!

Please, please, please renew Celebrity Family Feud!! It’s my favorite game show, and I love, love, love Steve Harvey! No one is funnier than this man, he cracks me up…

I don’t mind the show but like when everyday people are on it , kind of getting old . Cancel