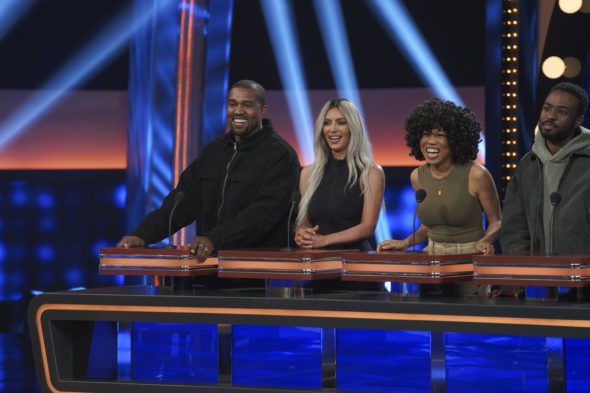 What does the survey say this time? Has the Celebrity Family Feud TV show been cancelled or renewed for a fifth season on ABC? The television vulture is watching all the latest cancellation and renewal news, so this page is the place to track the status of Celebrity Family Feud, season five. Bookmark it, or subscribe for the latest updates. Remember, the television vulture is watching your shows. Are you?

An ABC game show, Celebrity Family Feud is hosted by Steve Harvey. Just as on the original Family Feud series, celebrities and their family and friends try to guess the most popular answers to opinion surveys. The difference is, they’re playing for up to $25,000 for charities. Celebrity family teams competing in season four include: Team Kardashian vs. Team West; Stephen Curry vs. Chris Paul; Ice T and Coco vs. Vivica A. Fox; Tori Spelling and Dean McDermott vs. Amber Riley; Team Grey’s Anatomy vs. Team Station 19; Team NBA on TNT vs. Team MLB All-Stars; and Laurie Hernandez vs. Shawn Johnson.

Will ABC cancel or renew Celebrity Family Feud for season five? The numbers are steady and it’s a relatively cheap show to produce so I think it will be renewed. For now, I’ll keep an eye on the ratings and update this page with breaking developments. Subscribe for free alerts on Celebrity Family Feud cancellation or renewal news.

What do you think? Are you happy the Celebrity Family Feud TV show was renewed for season five? How would you feel if ABC had cancelled this TV series, instead?