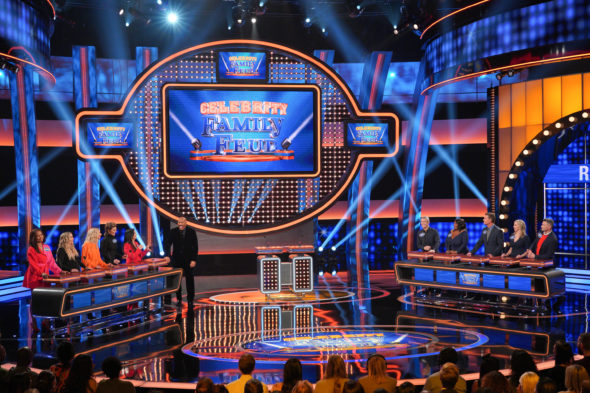 Is this game show still a winner? Has the Celebrity Family Feud TV show been cancelled or renewed for a seventh season on ABC? The television vulture is watching all the latest cancellation and renewal news, so this page is the place to track the status of Celebrity Family Feud, season seven. Bookmark it, or subscribe for the latest updates. Remember, the television vulture is watching your shows. Are you?

Find out how Celebrity Family Feud stacks up against other ABC TV shows.

3/28/21 update: Celebrity Family Feud has been renewed for a seventh season.

What do you think? Are you glad the Celebrity Family Feud TV show has been renewed for a seventh season? How would you feel if ABC had cancelled this TV series, instead?

Would like for ABC to bring back this
family nite game show . A show that was looked forward to by millions of viewers on a nitely bases. It’s a tradition in my house.

I am looking at the youtube everyday and night to see Family Feud. They need to clean up some of its questions but that is not Steve’s job. He is by far the most natural comedian ever! He is spontaneous and brings joy to us all. Please please keep him and the show on.

Please reconsider and continue this show. There is little to laugh about these days but Steve Harvey never lets us down!

Please do not cancel Family Feud, love this show. We watch it every night!

Family Feud has been taken off and I hope it gets renewed. It is one of the few shows I watch every night. I love Steve Harvey, I think he is a sincere real person.

The race of contestants has never mattered to me! It could be all black, all white or all purple and I wouldn’t care ! All lives matter!

It is all right. We are all here in this country and that’s the way it is.