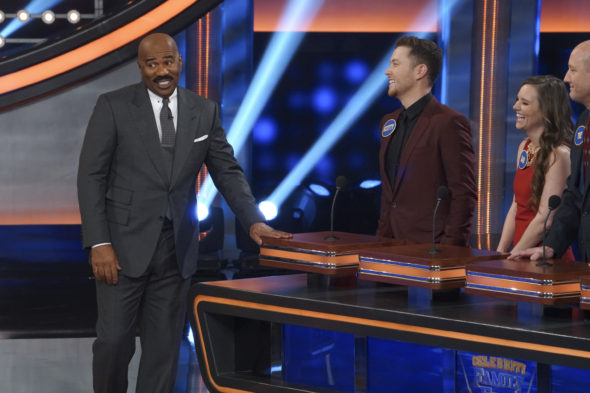 Is the Celebrity Family Feud TV show cancelled or renewed for a fifth season? Survey says: Renewed! Today, ABC renewed the popular celebrity-laden competition series for season five. The series has more or less held its own in the ratings, so the renewal was expected.

An ABC game show, Celebrity Family Feud is hosted by Steve Harvey. Just as on the original Family Feud series, celebrities and their family and friends try to guess the most popular answers to opinion surveys. The difference is, they’re playing for up to $25,000 for charities. Celebrity family teams competing in season four include: Team Kardashian vs. Team West; Stephen Curry vs. Chris Paul; Ice T and Coco vs. Vivica A. Fox; Tori Spelling and Dean McDermott vs. Amber Riley; Team Grey’s Anatomy vs. Team Station 19; Team NBA on TNT vs. Team MLB All-Stars; and Laurie Hernandez vs. Shawn Johnson.

Celebrity Family Feud: A Look at the Ratings

What do you think? Are you a fan of the To Tell the Truth TV series? Do you plan to check out season four on ABC? Let us know, below.