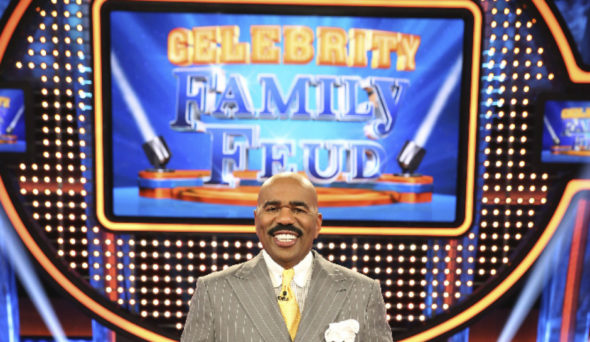 ABC is ready for fun and games this summer. This week, the network announced the premiere dates for new seasons of Celebrity Family Feud, The $100,000 Pyramid, and To Tell the Truth.

Celebrity Family Feud,’ ‘The $100,000 Pyramid’ and ‘To Tell the Truth’ Are Back With New Celebrities and Fun for the Whole Family This Summer

Hosted by television personality and best-selling author Steve Harvey, “Celebrity Family Feud” returns for its fourth season on ABC. A celebrity version of “Family Feud,” the 10-episode series will feature celebrity families and their immediate family members or their extended TV families, competing against each other to have fun and win money for charity.

Celebrity family teams that will be playing for charity this season include the following: Team Kardashian vs. Team West, Steph Curry vs. Chris Paul, Ice T & Coco vs. Vivica A. Fox, Tori Spelling & Dean McDermott vs. Amber Riley, Team Grey’s Anatomy vs. Team Station 19, Team NBA on TNT vs. Team MLB All-Stars, and Laurie Hernandez vs. Shawn Johnson, amongst others.

Hosted by “Good Morning America” co-anchor Michael Strahan, “The $100,000 Pyramid” is the timeless word association game in which two celebrities and their partners face off in a race against the clock to make it to the winners’ circle and take home $100,000.

Hosted by the star of ABC’s hit comedy “black-ish,” Anthony Anderson, “To Tell the Truth” is a funny re-imagination of the beloved game show that first aired in 1956. This version takes the excitement to another level, featuring fun characters from pop culture. Anderson’s mother, Mama Doris, is also part of the fun as a commentator.

What do you think? Are you a fan of ABC’s game shows? Will you watch any this summer?

Mama Doris makes To Tell The Truth. She is funny smart and a breath of fresh air…
.

I will probably watch all of them, but Family Feud is my fav!