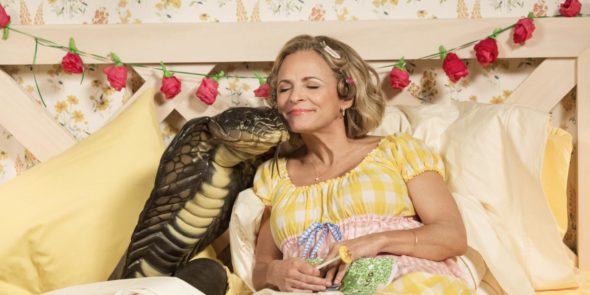 TruTV is returning home. Today, the network announced they’ve renewed At Home with Amy Sedaris for a second season.

truTV has ordered 10 episodes for season two of At Home with Amy Sedaris. Production is slated to begin later this year.

truTV today announced a 10-episode season two greenlight of its critically-acclaimed, half-hour variety sketch series, At Home with Amy Sedaris, co-created by Amy Sedaris and Paul Dinello (Strangers with Candy). Academy Award(R)-winning production company A24 (Lady Bird, 2 Dope Queens) is on board to produce the sophomore season of the scripted series, which will go into production later this year. In At Home with Amy Sedaris, Sedaris invites viewers into her delicious world, showcasing her unique, distinctive brand of hospitality and homemaking in weekly themed episodes which feature imaginative characters, how-to demonstrations, special guests, and more.

Hailed “a disturbing and delicious beast” by The New York Times and “colorful, good-hearted and deeply, profoundly deranged” by Rolling Stone, At Home with Amy Sedaris helped to expand truTV’s reach during its season one run, with more than a quarter of the audience comprised of new viewers. The critically-lauded series – which earned a perfect 100% fresh rating on Rotten Tomatoes – offered a comedic oasis for viewers through “laughs, comfort and catharsis” (Salon). As Buzzfeed said best, “Amy Sedaris is the weirdo the world needs right now.”

Season two of At Home with Amy Sedaris will be executive produced by Sedaris and A24’s Ravi Nandan. The series goes into production this summer and the 10-episode first season is currently available on the truTV app and On Demand.”

What do you think? Have you seen At Home with Amy Sedaris? Will you watch season two?