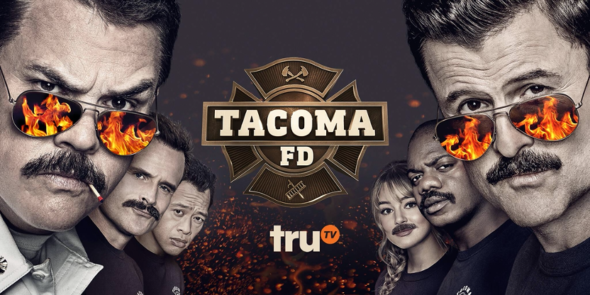 The ratings for Tacoma FD may not exactly be on fire but truTV wants a third season. The cable channel has announced the comedy series has been renewed.

Tacoma FD stars co-creators Kevin Heffernan and Steve Lemme, with Eugene Cordero, Marcus Henderson, Gabriel Hogan, and Hassie Harrison. Season two guests include Joe Pantoliano, Bobby Moynihan, Jessica Lowe, Jeff Dunham, Paul Soter, Martin Starr, Jimmy Tatro, Suzy Nakamura, and Jamie Kaler. The sitcom unfolds in a firehouse in one of the rainiest cities in the USA — Tacoma, Washington. Since Tacoma isn’t exactly a tinderbox, and these firefighters aren’t overwhelmed with blazes to battle, they keep busy with plenty of shenanigans, including creative competitions and some friendly rivalry with other area first responders.

“We couldn’t be more proud of the work this team has achieved season after season” said Brett Weitz, General Manager of TBS, TNT, and truTV. “With Tacoma FD’s fanbase continuing to grow, the show is a huge success story for us, and we can’t wait to see what kind of Station 24 shenanigans Kevin, Steve, and the incredible cast come up with next.”

Weitz surprises Heffernan and Lemme with the Season 3 pick-up announcement on tomorrow’s episode of Talkoma FD, airing on August 6 at 10:30pm ET/PT on truTV.

“I’m incredibly excited — mostly because I get to watch Kevin begin his arduous, six-month mustache-growing process,” said Lemme. “He only has 12 hair holes in his upper lip, so it takes some time.”

Tacoma FD is a half-hour comedy set in a firehouse in one of America’s rainiest cities. These firefighters keep themselves entertained with creative competitions, friendly first responder rivalries and no shortage of bizarre emergency calls. Chief Terry McConky (Heffernan) and Captain Eddie Penisi (Lemme) lead the firehouse antics and are joined by an eclectic crew played by Eugene Cordero (Andy), Marcus Henderson (Granny), Gabriel Hogan (Ike), and Hassie Harrison (Lucy). New episodes of Tacoma FD air each Thursday at 10:00pm ET/PT, with the after show Talkoma FD airing at 10:30pm ET/PT on truTV.

Tacoma FD is executive produced by Heffernan and Lemme alongside David Miner and Greg Walter from 3 Arts Entertainment.

About truTV
truTV, a WarnerMedia Entertainment brand, is a bold, fresh entertainment network that gives viewers audacious content with laugh-out-loud moments and relatable characters. With millions of engaged fans across linear, digital and social channels, the cable network features a growing roster of critically acclaimed and fan-favorite, premium scripted, non-scripted and hybrid series, such as Impractical Jokers, Hot Ones: The Game Show, At Home with Amy Sedaris, I’m Sorry, Tacoma FD, Tirdy Works, The Carbonaro Effect, and more. truTV is also a partner in airing the NCAA Division I Men’s Basketball Championship each year.
Website: www.trutv.com

What do you think? Do you like the Tacoma FD TV series? Are you glad to know that it’s been renewed for a third season?

HILARIOUS! Reminds me of our FD where I live. Chief, Captain, 2 paramedics, Engineer and firefighter. Thankfully most of their calls are medical emergencies. Love them. So glad this show has been renewed.

Yes, PLEASE!! More Tacoma FD for me! I worked ambulance many years ago. One of the stations was a building with bunk beds (downstairs) the kitchen, tv, chairs…
Brought back good memories! I love the show!!!

If you haven’t seen Tacoma FD you’re missing very possibly the funniest show on any network or TV this last 2 years. Hilarious!! Sure, it’s rude, crude honor. But it doesn’t let up and still offers a good message each week. I’m not just saying this either. The press conference after the fire at the sex toy store is priceless. Look it up! And TRU TV not extra $$.

I gotta admit that press conference at the sex toy factory is what got me into Tacoma FD, I live in the UK and I really love it

Love the Broken Lizard guys and this show is a MUST SEE !!! It is extremely entertaining and even though it has been renewed, I wish it could gain a larger audience so that more people will learn to love it, and I also love the after show TALKOMA FD.

this is a funny show, it’s an ADULT, humor show, but worth the watch, better than ANY dating/competition/singing/dancing/housewives / reality , etc. show