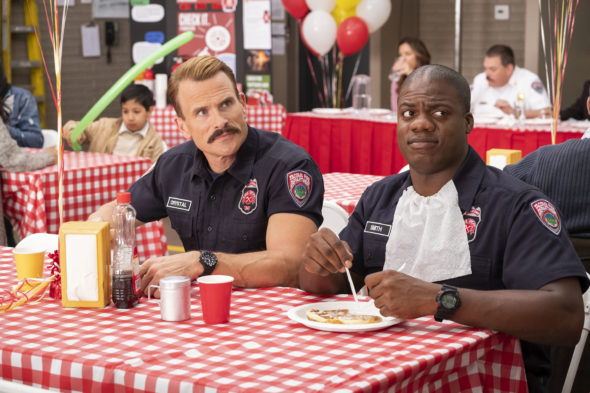 Has Tacoma gone up in flames? Is the Tacoma FD TV show cancelled or renewed for a second season on truTV? The television vulture is watching all the latest cancellation and renewal news, so this page is the place to track the status of Tacoma FD season two. Bookmark it, or subscribe for the latest updates. Remember, the television vulture is watching your shows. Are you?

A truTV workplace comedy, Tacoma FD stars co-creators Kevin Heffernan and Steve Lemme, with Eugene Cordero, Marcus Henderson, Gabriel Hogan, Hassie Harrison, and Suzy Nakamura. The sitcom unfolds in a firehouse in one of the rainiest cities in the USA — Tacoma, Washington. Since Tacoma isn’t exactly a tinderbox, and these firefighters aren’t overwhelmed with blazes to battle, they keep busy with plenty of shenanigans, including creative competitions and some friendly rivalry with other area first responders.

The first season of averaged a 0.19 rating in the 18-49 demographic with 359,000 viewers. Learn how Tacoma FD stacks up against other truTV TV shows.

Will truTV cancel or renew Tacoma FD for season two? The series had a “special premiere” on a Sunday night and the subsequent ratings have been better than other truTV series. I think it will be renewed. I’ll keep a hungry eye out for news and will update this page. Subscribe for free updates on Tacoma FD cancellation or renewal news.

6/18/19 update: Tacoma FD has been renewed for a second season by truTV.

What do you think? Are you glad that the Tacoma FD TV show has been renewed for a second season? How would you feel if truTV had cancelled this TV series, instead?

My daughter and I are in love with this show! We are hoping for a new season… it’s freaking hilarious! We watch episodes over and over again from the DVR. Please please please renew!

one of the BEST,and TRULY funniest shows i have seen since schitts creek my husband and i really want season two of tacoma fd….