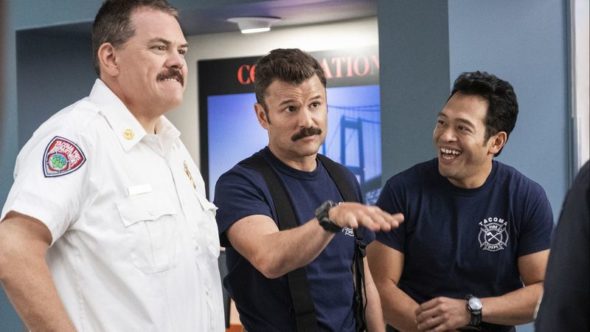 truTV is heading back to Washington. The network just announced they’ve renewed Tacoma FD for a second season.

The comedy series unfolds in a firehouse in one of the rainiest cities in the USA — Tacoma, Washington. Since Tacoma isn’t exactly a tinderbox, and these firefighters aren’t overwhelmed with blazes to battle, they keep busy with plenty of shenanigans, including creative competitions and some friendly rivalry with other area first responders. The cast includes Kevin Heffernan, Steve Lemme, Eugene Cordero, Marcus Henderson, and Gabriel Hogan.

truTV has ordered 13 episodes for season two of Tacoma FD. You can read more info below:

Los Angeles, June 18, 2019 – Fresh off of its blazing-hot first season, WarnerMedia’s truTV announced today the second season order for Tacoma FD, the scripted comedy series from co-creators and stars Kevin Heffernan and Steve Lemme of the Super Troopers movie franchise. Tacoma FD launched as the #1 new cable comedy among young adults when it premiered earlier this year and finishes among cable’s top 5 scripted comedies. The 13-episode second season order will go in to pre-production later this year and is slated for release in 2020.

Tacoma FD is a half-hour comedy set in a firehouse in one of America’s rainiest cities. Light on blazes that need extinguishing, these firefighters keep themselves entertained with creative competitions, friendly first responder rivalries and no shortage of bizarre emergency calls. Chief Terry McConky (Heffernan) and Captain Eddie Penisi (Lemme) lead the firehouse shenanigans and are joined by an eclectic crew played by Eugene Cordero (Andy), Marcus Henderson (Granny), Gabriel Hogan (Ike) and Hassie Harrison (Lucy).

Dubbed “one of the year’s best comedies” (Den of Geek) and with a 96% fresh audience score on Rotten Tomatoes, Tacoma FD quickly resonated with fans due to its affable ensemble cast and signature sense of humor that has cultivated a massive, passionate fan base – one that has reliably followed Heffernan and Lemme from movies to cable.

After hearing about the season two pick up, Lemme and Heffernan said, “While we realize this should be a time for rejoicing, our first thought is: ‘Damn, guess we gotta grow those mustaches back.'”

Tacoma FD is executive produced by Heffernan and Lemme alongside David Miner and Greg Walter from 3 Arts Entertainment and Kyle Clark from Silverscreen Pictures.

All 10 episodes from the first season of Tacoma FD are currently available for viewing on the truTV app, VOD and truTV.com.”

What do you think? Have you seen Tacoma FD? Will you watch season two?

Hilarious and off color love it!

Tacoma FD is THE BEST show on tv! To not continue producing seasons of this show that contains such great comedic talent throughout the cast, would be an extremely poor decision and just a real damn shame. Please, please, PLEASE keep creating more of Tacoma FD! ♥️‍‍

I LOVE Tacoma FD. I can’t wait for season 2.

They need to keep Empire I love that show.tyyvt