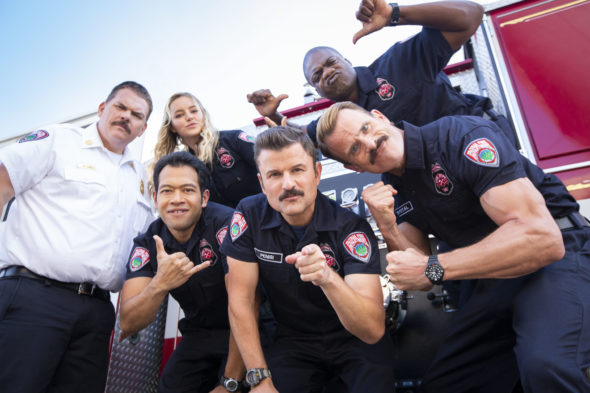 How hot is the first season of the Tacoma FD TV show on truTV? As we all know, the Nielsen ratings typically play a big role in determining whether a TV show like Tacoma FD is cancelled or renewed for season two. Unfortunately, most of us do not live in Nielsen households. Because many viewers feel frustration when their viewing habits and opinions aren’t considered, we’d like to offer you the chance to rate all of the Tacoma FD season one episodes here. *Status update below.

A truTV sitcom, Tacoma FD stars co-creators Kevin Heffernan and Steve Lemme, with Eugene Cordero, Marcus Henderson, Gabriel Hogan, Hassie Harrison, and Suzy Nakamura. The workplace comedy unfolds in a firehouse in one of the rainiest cities in the USA — Tacoma, Washington. Since Tacoma isn’t exactly a tinderbox, and these firefighters aren’t overwhelmed with blazes to battle, they keep busy with plenty of shenanigans, including creative competitions and some friendly rivalry with other area first responders.

What do you think? Which season one episodes of the Tacoma FD TV series do you rate as wonderful, terrible, or somewhere between? Should truTV cancel or renew Tacoma FD for a second season? Don’t forget to vote, and share your thoughts, below.