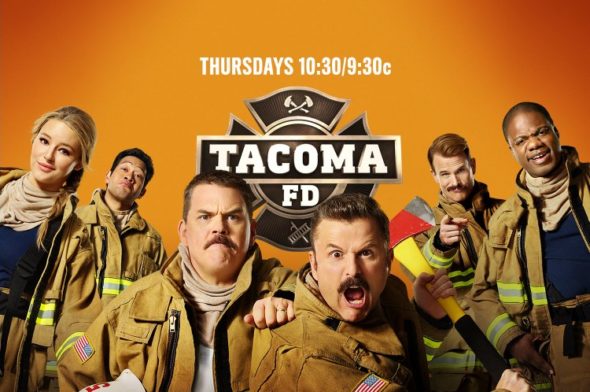 Although truTV specializes in reality programming with a comedic bent, the cable network has a small scripted comedy slate, too. Its newest entry in that category is the Tacoma PD TV show. Will the first season of the sitcom set the Nielsen ratings afire? Will Tacoma FD be cancelled or renewed for season two? Stay tuned. *Status update below.

A truTV workplace comedy, Tacoma FD stars co-creators Kevin Heffernan and Steve Lemme, with Eugene Cordero, Marcus Henderson, Gabriel Hogan, Hassie Harrison, and Suzy Nakamura. The sitcom unfolds in a firehouse in one of the rainiest cities in the USA — Tacoma, Washington. Since Tacoma isn’t exactly a tinderbox, and these firefighters aren’t overwhelmed with blazes to battle, they keep busy with plenty of shenanigans, including creative competitions and some friendly rivalry with other area first responders.

What do you think? Do you like the Tacoma FD TV show? Should it be cancelled or renewed for a second season on truTV?

Tacoma FD is so funny!!!!! I have the shows recorded to watch again and again and show people that come over. Guys ya’ll got to watch this show!

Is season 2cancelled Yes OR NO

I love Tacoma FD. I had never seen Super Troopers before this show. I love both!