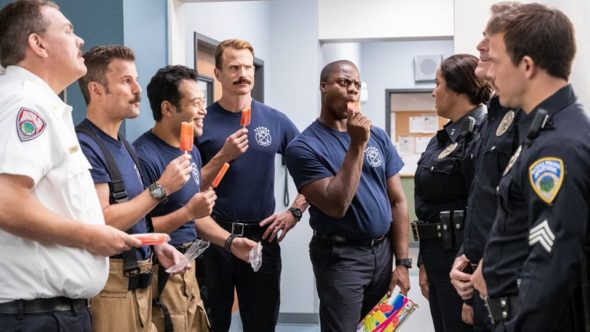 Is this crew just as hot in the second season of the Tacoma FD TV show on truTV? As we all know, the Nielsen ratings typically play a big role in determining whether a TV show like Tacoma FD is cancelled or renewed for season three. Unfortunately, most of us do not live in Nielsen households. Because many viewers feel frustration when their viewing habits and opinions aren’t considered, we invite you to rate all of the second season episodes of Tacoma FD here. *Status Update Below.

What do you think? Which season two episodes of the Tacoma FD TV series do you rate as wonderful, terrible, or somewhere between? Do you think that Tacoma FD should be cancelled or renewed for a third season on truTV? Don’t forget to vote, and share your thoughts, below.

*8/6/20 update: Tacoma FD has been renewed for a third season on truTV.

Love this show really just watched it for the first time recently. The guys from super troopers are hilarious anyway but I wasn’t sure it would translate in a sitcom form and it works it’s funny a little crude and not too cheesy lol . Thumbs up for me keep it going thank you

This absolutely is the funniest show currently running. The cast is perfect. I laugh from the minute it starts, but…… I’m easy. It even gets my wife laughing, and she’s not so easy.

Tacoma FD is a hoot! Fire in Sextown is hands down hilarious. I’ve watched the sign language interpreter scene a dozen times and it still kills me. Really great casting and you can tell there is great chemistry among them. I love the inside references to other movies and having lived in Tacoma it’s great to see the city get some love. Don’t miss Tacoma FD!