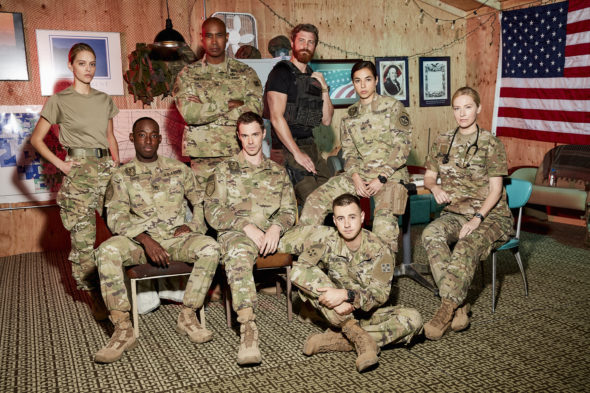 TV show description:
A comedy-drama produced by Brian Grazer and Ron Howard, 68 Whiskey follows a multicultural band of Army medics stationed in Afghanistan on a base nicknamed “The Orphanage.”

Together, the medics navigate a dangerous and sometimes absurd world, relying on comradery, various vices, and, occasionally, a profound sense of purpose to carry them through.

Cooper Roback (Keeley) is a charming Army medic with a hell of an instinct for medicine and a general disdain for Army discipline.

Grace Durkin (Golightly), an administrative assistant in the Army who is both beautiful and street smart. Durkin has dreams that all take place far from Afghanistan and makes a point not to build any strong personal connections, but she’s considering making an exception for Roback.

Sergeant Rosa Alvarez (Rodlo) went to college on a G.I. bill, and, after graduation, trained as a medic so she would have a marketable skill back home. When her father gets deported after an ICE raid, her outlook on defending the country changes.

Staff Sergeant Mekhi Davis (Tardy) is clever, mischievous and always looking for a way to get ahead, but would never leave anyone behind. He’s a skilled medic, but when duty isn’t on the line, he’ll happily join Roback’s half-baked plans that will surely get the both of them in trouble.

Anthony Petrocelli (Coombe) is a 17-year-old Army Private who looks 16 and acts like he’s 15. Fresh-faced and gullible, Anthony is a stickler for the rules up until the moment he’s included in a plan.

Sasquatch (Theler) is a mercenary and a member of SecCorp, a privately contracted security force. He’s a large man who is oddly quite handsome despite his intimidating appearance and nickname.

Major Sonia Holloway (Riesgraf) is the highest-ranking doctor on base and isn’t afraid to use her authority. With a family back home in the United States, she maintains an emotionless demeanor to hide the troubling thoughts in the back of her mind.

Recurring characters include Captain Hazara (Ally), a Pakistani doctor in the British Armed Forces; Colonel Harlan Austin (Thompson), a decorated war hero and in charge of every combat solider and medical staff on the base; Khalil (Benson), a young Afghan Army private; Chef Colin Gale (Glenane), a rugged man from the Australian Army who officiates the illegal boxing matches that take place at the base.

What do you think? Do you like the 68 Whiskey TV show? Do you think it should have been cancelled or renewed for a second season?

NOT the situations I had in the ARMY.

Why did 68 Whiskey only run for one season, that was a good show, it took me a couple episodes to get into it, but I did, then it was gone, what a shame, really was a good show.

So glad to see this trash cancelled.

I do not want to see it canceled. We loved the first (& hopefully more) series. I told many of my friends about it thinking it was returning. Sorry to hear it won’t be returning.

68 Whisky is a great show!!! Please renew it! I predict it will be a long running great series!!!

Stumbled on to this show and after watching the first eason we hope to see more. We are hooked.