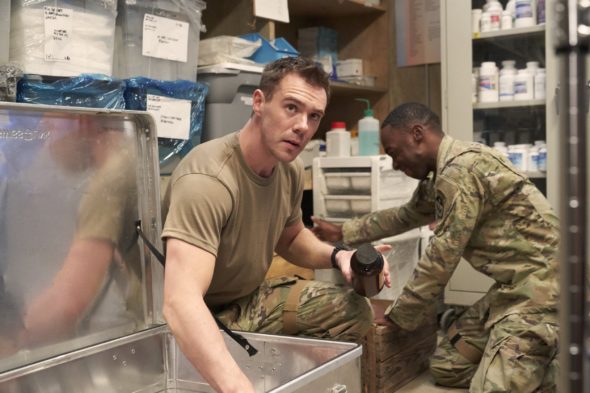 Do these medics have what it takes in the first season of the 68 Whiskey TV show on Paramount Network? As we all know, the Nielsen ratings typically play a big role in determining whether a TV show like 68 Whiskey is cancelled or renewed for season two. Unfortunately, most of us do not live in Nielsen households. Because many viewers feel frustration when their viewing habits and opinions aren’t considered, we invite you to rate all of the first season episodes of 68 Whiskey here.  *Status Update Below.

A Paramount Network comedy-drama, the 68 Whiskey TV series stars Sam Keeley, Jeremy Tardy, Gage Golightly, Cristina Rodlo, Beth Riesgraf, Lamont Thompson, Nicholas Coombe, and Derek Theler, with Usman Ally, Lamont Thompson, Artur Benson, and Aaron Glenane in recurring roles. The show follows a multicultural band of Army medics stationed in Afghanistan on a base nicknamed “The Orphanage.” Together, the medics navigate a dangerous and sometimes absurd world, relying on comradery, various vices, and, occasionally, a profound sense of purpose to carry them through.

What do you think? Which season one episodes of the 68 Whiskey TV series do you rate as wonderful, terrible, or somewhere between? Do you think that 68 Whiskey should be cancelled or renewed for a second season on Paramount Network? Don’t forget to vote, and share your thoughts, below.

68 Whiskey is very entertaining and the characters have good chemistry. at least let them close the story.

Why cancel a good entertain show such as 68 whiskey ,it’s got comedy drama & suspense
For god sake do not cancel the show,as it is this days there is not much new on.

68 Whisky was one of our favorite shows. I hope that Paramount will reconsider and continue this series. There is no other show like it.

This has been agreat season one myself and my partner hope that there is a season 2. We stumbled on the series as we live in Spain found it on tv streaming .it has kept us amused and interested for whole season …..please make season 2