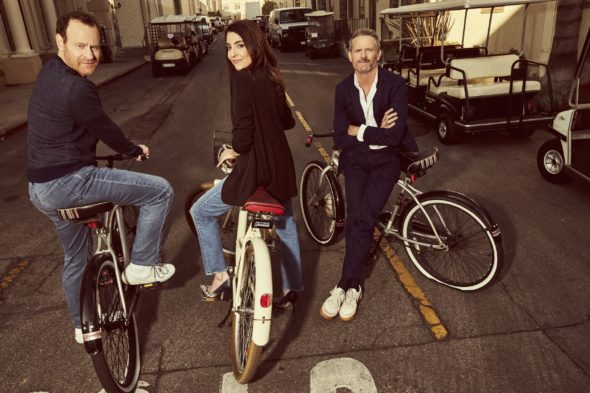 Is this Rachel, Hugh, and Larry’s big break? Has the Nobodies TV show been cancelled or renewed for a third season on TV Land? The television vulture is watching all the latest cancellation and renewal news, so this page is the place to track the status of Nobodies, season three. Bookmark it, or subscribe for the latest updates. Remember, the television vulture is watching your shows. Are you?

A TV Land sitcom, Nobodies stars creators, writers, and alumni of The Groundlings improv company, Hugh Davidson, Larry Dorf, and Rachel Ramras, as fictionalized versions of themselves. The trio is just trying to make the big time, with a little help from their famous friends. Guest stars in the second season include Kristin Wiig, Sia, Leslie Bibb, Cedric The Entertainer, Michael MacDonald, Ben Falcone, and Melissa McCarthy, with Mark-Paul Gosselaar recurring.

The second season of Nobodies averaged a 0.08 rating in the 18-49 demographic with 393,000 viewers. Compared to season one on TV Land, that’s up by 8% in the demo and up by 10% in viewers. Learn how Nobodies stacks up against other TV Land TV shows.

The series supposedly moved from TV Land to the new Paramount Network for season two. However, the programmers simulcast the first two episodes on both channels. Subsequent episodes have only aired on TV Land. Season two of Nobodies has been doing a bit better in the ratings when compared to season one but it’s still the channel’s lowest-rated comedy. I suspect this comedy will be renewed but it could easily be cancelled based on the ratings. I’ll update this page with breaking developments. Subscribe for free Nobodies cancellation or renewal alerts.

What do you think? Did you hope the Nobodies TV show will be renewed for season three? How do you feel now that TV Land has cancelled this TV series, instead?