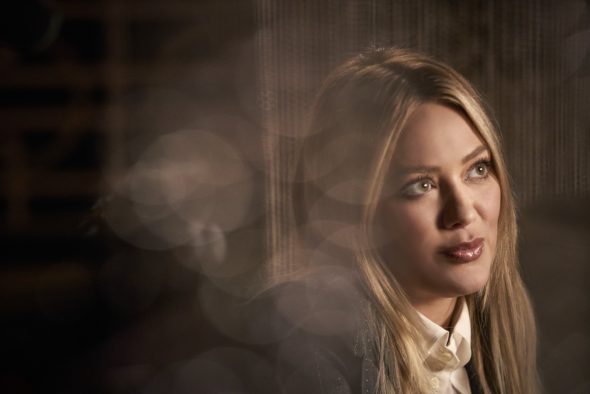 Is this series feeling its age? Has the Younger TV show been cancelled or renewed for a seventh season on TV Land? The television vulture is watching all the latest cancellation and renewal news, so this page is the place to track the status of Younger season seven. Bookmark it, or subscribe for the latest updates. Remember, the television vulture is watching your shows. Are you?

A TV Land romantic comedy, Younger stars Sutton Foster, Debi Mazar, Miriam Shor, Nico Tortorella, Hilary Duff, Molly Bernard, Peter Hermann, and Charles Michael Davis. The story centers on single mother Liza Miller (Foster) who passes herself off as a 20-something, to land a job in the publishing industry. As Liza’s personal and professional lives mesh, keeping her secret becomes more difficult. This season finds Kelsey (Duff) growing into her position as publisher at Millennial Print. Meanwhile, Liza and Charles (Hermann) are finding their footing, now that he no longer runs the business.

The sixth season of Younger averaged a 0.13 rating in the 18-49 demographic and 580,000 viewers. Compared to season five, that’s down by 39% and 14%, respectively. Learn how Younger stacks up against other TV Land TV shows.

Will TV Land cancel or renew Younger for season seven? It has been the Viacom-owned cable network’s best performing original series. After a blood-letting — which saw the cancellation of both Teachers and Nobodies — Younger season six debuted as TV Land’s only remaining original series. It was supposed to move to Paramount Network (which was previously Spike TV), but as the parent company reworked all of its cable nets’ programming, they cancelled that plan. I’m not so sure that ratings will be the biggest factor in deciding Younger‘s fate. I think that it will instead come down to whether they still want to run original programming or not. If they do, another season of Younger could help them establish a new show. If they don’t, Younger may well age out. I’ll keep an eye on the Nielsen ratings, but I think this decision will come down to the bigger picture, so subscribe for free Younger cancellation or renewal alerts.

2/25/21 update: The Younger TV show has been renewed for a seventh and final season.

What do you think? Are you glad that the Younger TV show has been renewed for a seventh season? Are you sorry that there won’t be an eighth season?

Younger has been a breath of fresh air briddging the generation gap with aplomb. It is so sad to see that viewers would prefer to watch insipid reality shows that have no content relevant to the viewers life, than inteligently written t.v shows. Younger has so much more to offer it is a pity season 7 is the last. I hope somone else picks it up.