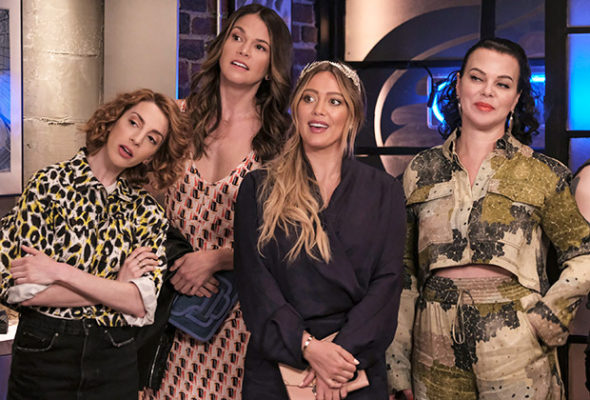 The Younger TV show is going to get a little older. TV Land has renewed the television series for a seventh season. The sixth season is currently airing on Wednesday nights.

A romantic comedy, Younger stars Sutton Foster, Debi Mazar, Miriam Shor, Nico Tortorella, Hilary Duff, Molly Bernard, Peter Hermann, and Charles Michael Davis. The story centers on single mother Liza Miller (Foster) who passes herself off as a 20-something, to land a job in the publishing industry. As Liza’s personal and professional lives mesh, keeping her secret becomes more difficult. In the sixth season, Kelsey (Duff) grows into her position as publisher at Millennial Print. Meanwhile, Liza and Charles (Hermann) find their footing, now that he no longer runs the business.

The sixth season of Younger is currently averaging a 0.13 rating in the 18-49 demographic and 606,000 viewers. Compared to season five, that’s down by 37% and 10%, respectively. At this point, Younger is the only original scripted series on TV Land.

Here’s a press release about the season seven renewal:

New York, NY – July 24, 2019 – TV Land is picking up the critically-acclaimed, Darren Star hit series Younger for a seventh season, it was announced today by Keith Cox, President, Development and Production, Paramount Network and TV Land. The news comes in the middle of its record-breaking sixth season, currently airing Wednesdays at 10:00 p.m. ET/PT.

Younger’s sixth season debuted on June 12 and recorded its highest-rated season premiere ever in the key P25-54 and W25-54 demos. It was also up +23% among total viewers, with 1.3 million tuning in to the season six premiere. The series remains the top sitcom in cable for the third year in a row among W25-54 and W18-49.

“Season after season, Younger has continued to reach new heights and build an incredibly loyal fan base,” states Cox. “We love this talented and amazing cast and can’t wait to see what Darren has in store for season seven.”

The series continues to be a media favorite: Entertainment Weekly said “Proving that not everything slows down in old age, Younger is back for its sixth season with even more drama and wit;” TV Guide noted “Younger just gets better with age;” and Entertainment Tonight remarked “Younger remains one of summer’s can’t-miss shows.”

Younger is created by Darren Star and stars two-time Tony(R) winner Sutton Foster with Hilary Duff, Debi Mazar, Miriam Shor, Nico Tortorella, Peter Hermann, Molly Bernard and Charles Michael Davis. The series’ passionate fan base has helped the series expand off the TV screen to include the five-star reviewed weekly podcast, Younger Uncovered, a weekly after-show entitled Getting Younger, and the launch of two books from Simon and Schuster entitled, Marriage Vacation and The Miseducation of Henry Cane. Younger also has an extensive global footprint sold across 162 countries and territories worldwide. With the news of a seventh season, Younger will be TV Land’s longest running original series.

Younger follows Liza Miller (Foster), a talented editor navigating the highly competitive world of publishing – while juggling the complications of mixing business with pleasure and facing the lie she created about her age to land her dream job. In season six, Kelsey (Duff) is leaning into her new role as publisher at the freshly minted Millennial Print, while Liza and Charles get acclimated to their new normal now that Charles (Hermann) is no longer running the business.

Younger, which films at the legendary Silvercup Studios in New York, is created, executive produced and written by Darren Star, with Tony Hernandez of JAX Media executive producing. Dottie Zicklin, Eric Zicklin and Alison Brown also serve as executive producers and writers on the series. Star is about to start production on his new Paramount Network series, Emily in Paris. The show will star Golden Globe-nominated actress Lily Collins as the titular Emily in the dramedy.

About TV Land
TV Land is a curated lineup of time-tested sitcoms topped off by breakout hit original series Younger from Darren Star, all available on air, at TVLand.com and on the TV Land app. Younger continues to thrive with a winning combination of comedy and drama, making it the #1 original ad-supported cable sitcom with women 18-49 and women 25-54. In addition, TV Land continues to reign as the destination for the best of memorable television series and modern-day classic sitcoms with a programming slate that includes the hit comedies Everybody Loves Raymond, The Goldbergs, The Golden Girls and Two and a Half Men. For up-to-the-minute and archival press information and photographs visit the TV Land press site and follow us on Twitter at @TVLandPR for the latest in breaking news updates, behind-the-scenes information and photos.

What do you think? Do you like the Younger TV show on TV Land? Will you be watching season seven?

I really like this show, everyone is great, however the back and forth for liza with charles and josh is getting monotonious, I was for both relationships, pro and con, but now I want her to choose one and be done with that side of the story, there are multiple characators and there are plenty of story lines to go in different directions, without having to be oh, this week its Charles and next week its Josh, I’m tired of that. I think others are too.

I don’t believe Liza would have anything to do with Josh. Please drop him from season 7

Yes I will be watching the series. I love all the actors and I love it all

I was an original fan of younger. I found it fresh, original and fun. I’ve watched every season. This summer I havent enjoyed the episodes. Ot me they felt stale and obvious. I didn’t care what happened to anyone. I wonder if it’s the show or just that my interests have changed in the past 6 years.