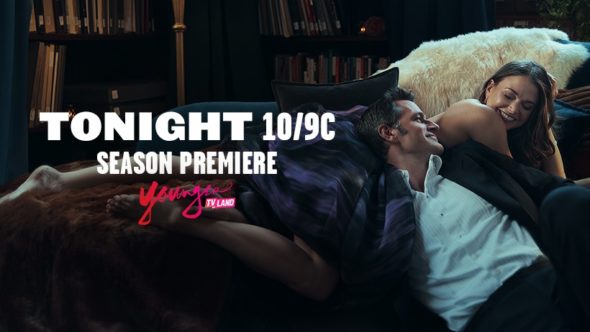 For its sixth season, the Younger TV show was supposed to Paramount Network. In early spring though, their parent company changed its mind and announced Younger season six would run TV Land. As Viacom has rebranded some cable networks (e.g. Spike became Paramount) and shifted programs between others, Younger was left not only as TV Land’s best performing original series, but also its only remaining one. With all this upheaval between sister stations, will that matter? Will Younger be cancelled or renewed for season seven? Stay tuned. *Status update below.

A TV Land comedy-drama, Younger stars Sutton Foster, Hilary Duff, Debi Mazar, Miriam Shor, Nico Tortorella, Molly Bernard, Peter Hermann, and Charles Michael Davis. The series centers on single mother Liza Miller (Foster) who passes herself off as a 20-something, to land a job in the publishing industry. As Liza’s personal and professional lives mesh, keeping her secret becomes more difficult. This season finds Kelsey (Duff) growing into her position as publisher at Millennial Print. Meanwhile, Liza and Charles (Hermann) are finding their footing, now that he no longer runs the business.

What do you think? Do you still like the Younger TV series? Should TV Land cancel or renew this TV show for a seventh season?

*2/25/21 update: The Younger TV show has been renewed for a seventh and final season.

I’m glad I have live TV. When this comes on I rewind to previous shows until this is over with then I fast forward past this. I’ve never liked this show. It’s not for TV Land. Also I agree with Bob the promos for this show are a bit much! You try to drown us with them! Move it to another network.

Not impressed with Season 6. Is it a musical show now? Are there new writers? Episodes used to have a storyline. Now the scenes are moving much quicker & not very impressed with any of the characters. I just go back to watching the previous seasons! So much better!

Season 6 has lost the ‘edge’s that all previous seasons had. IMO it’s over.

Younger is not a good fit for TVLand. Move it to a channel more in line with the content. Plus that I personally think it’s a yawner!! Maybe a better title. 2

You’re right…TV Land is the wrong network for Younger. I like some of the other shows TV Land offers, but I can’t take the constant promo’s for this show another minute.

Move it to some other sappy, annoying chick channel where it belongs. Thank you!