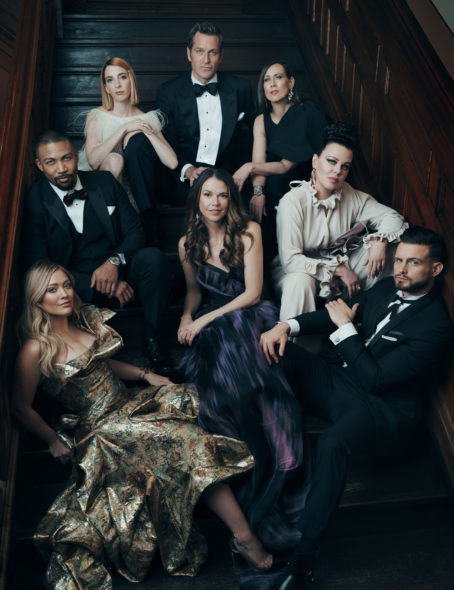 Is Liza Miller keeping it together during the sixth season of the Younger TV show on TV Land? As we all know, the Nielsen ratings typically play a big role in determining whether a TV show like Younger is cancelled or renewed for season seven. Unfortunately, most of us do not live in Nielsen households. Because many viewers feel frustration when their viewing habits and opinions aren’t considered, we’d like to offer you the chance to rate all of the Younger season six episodes here. *Status update below.

A TV Land dramedy, Younger stars Sutton Foster, Hilary Duff, Debi Mazar, Miriam Shor, Nico Tortorella, Molly Bernard, Peter Hermann, and Charles Michael Davis. The series centers on single mother Liza Miller (Foster) who passes herself off as a 20-something, to land a job in the publishing industry. As Liza’s personal and professional lives mesh, keeping her secret becomes more difficult. This season finds Kelsey (Duff) growing into her position as publisher at Millennial Print. Meanwhile, Liza and Charles (Hermann) are finding their footing, now that he no longer runs the business.

What do you think? Which season six episodes of the Younger TV series do you rate as wonderful, terrible, or somewhere between? Should TV Land cancel or renew Younger for a seventh season? Don’t forget to vote, and share your thoughts, below.

*2/25/21 update: The Younger TV show has been renewed for a seventh and final season.

I am In love with Younger Best series i have ever watched , I am hoping for more seasons 7,8,9 this is so entertaining, i am rather sad because i am all out of seasons to watch,iv watched it all and eager for more.
im a Josh and Liza fan big time fan. I know its just a show but it feels so real.

I LOVE every season of younger until this season. Who is writing this musical crap? Who even cares bc if they don’t go back to the great episodes of the earlier seasons I won’t be watching next season.

keep the show coming with more, love the show and loving this season

Go right ahead & cancel it.

So insightful and enlightening. Note, that was sarcasm. If you’re going to throw that out there, give a reason. Or an even better idea, don’t say anything.