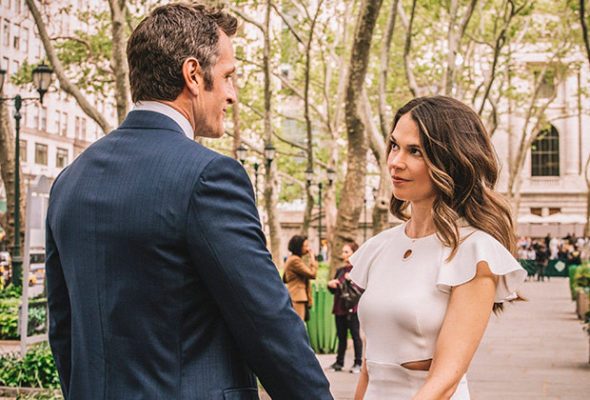 Younger will be back this summer. TV Land just revealed the premiere date for the TV show’s sixth season.

The comedy series centers on single mother Liza Miller (Sutton Foster) who passes herself off as a 20-something to land a job in the publishing industry. The cast also includes Debi Mazar, Miriam Shor, Nico Tortorella, Hilary Duff, Molly Bernard, Peter Hermann, and Charles Michael Davis.

New York, NY, April 9, 2019 — Younger is making its big return this summer! The critically acclaimed, smash-hit series from the Emmy winning writer-producer Darren Star will remain at TV Land when it debuts its upcoming sixth season on Wednesday, June 12 at 10:00 p.m. ET/PT.

In season six, Kelsey (Duff) is leaning into her new role as publisher at the freshly minted Millennial Print, while Liza and Charles get acclimated to their new normal now that Charles (Hermann) is no longer running the business.

Additionally, 2018 Critic’s Choice supporting actress nominee Miriam Shor, who plays Diana, is confirmed to direct an episode this season. This will be Shor’s second time directing the series.

Season five of Younger aired in summer 2018 and was its highest-rated season to date among P 18-49 (L+SD). The series’ passionate fan base has helped the series expand off the TV screen to include the five-star reviewed weekly podcast, Younger Uncovered, a weekly after-show entitled Getting Younger, and the launch of a book from Simon and Schuster entitled, Marriage Vacation.

What do you think? Do you watch Younger? Who’s your favorite character?

Are we sure it’s staying on TVLand? I can’t wait.