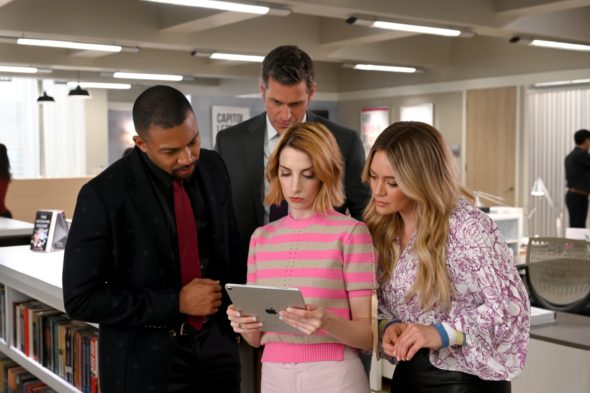 It seems that the end is near for the Younger TV show. According to one of the show’s actors, there won’t be an eighth season of the TV Land series.

A romantic comedy, Younger stars Sutton Foster, Debi Mazar, Miriam Shor, Nico Tortorella, Hilary Duff, Molly Bernard, Peter Hermann, and Charles Michael Davis. The story centers on single mother Liza Miller (Foster) who passes herself off as a 20-something, to land a job in the publishing industry. As Liza’s personal and professional lives mesh, keeping her secret becomes more difficult. This season finds Kelsey (Duff) growing into her position as publisher at Millennial Print. Meanwhile, Liza and Charles (Hermann) are finding their footing, now that he no longer runs the business.

Younger was renewed for a seventh season in July 2019 and, according to Duff, that will be the end of the show. In a recent interview, Duff shared,

It has been tough because I’m supposed to be in New York right now filming last season, and we have been on hold for quite a few months. Things are starting to shoot in New York and open back up again. I think production is feeling confident that in the next month or two we can get back to our schedule and shoot our last season.

Due to the ongoing pandemic, Huff says that the cast hasn’t been able to read scripts for the final episodes. The actress is confident that series creator Darren Starr will deliver a satisfying ending. She said,

He writes amazing (scripts) for women and we feel so empowered to be on the show and to be playing the women that we are playing. They’re all very different, but with very strong and flawed qualities — so I’m sure this last season will not disappoint.

While Younger may be coming to an end, a spin-off that revolves around Duff’s character is in the works.

What do you think? Do you like the Younger TV series? Do you think that it should end with season seven or, continue for an eighth season? Would you watch a spin-off?

I wish, wish, wish there’d be another season. Don’t end it!!!! A spin off would depend on what it was about and who was in it.

I love love love this show and it would make me very happy if they did another season. I am also interested in the idea of a spin off show as well.
I love the wiring and the characters.

Actually, I’d be more interested in a spin off of Sutton Foster’s character

I absolutely love this show. It’s funny, warm and shows what any woman can accomplish not matter what she is. I’d watch season 8, as long as they keep the ideas fresh and some what believable not too sure about a spin off. Sutton is a great actress

I’m not a television fan. I bet I haven’t watched a series of anything in 6 years but I recently started watching this series and I was hooked. I hope it returns for an 8th series but probably wouldn’t watch a spin-off. Hillary Duff’s character plays a big role but she’s not the heart of the series.

I enjoy and look forward to seasons of Younger. I hope it dosen’t go off. I like Liza and Charles the best. A spinoff?? Idk I would probably watch 1 or 2 episodes 1st before I gave an opinion. I’m not that interested in a spinoff. I like the original cast and storyline

I love this show. I think the ratings would be a lot better if there wasnt such a long break in between seasons. Except for the pandemic, there is absolutely no reason why we need to for a year or more for the next season. People lose interest or find other shows to watch. .

I would LOVE to have Younger continue after Season 7, but I would ALSO welcome a spin-off as I love every character in this great series!!

I have thoroughly enjoyed Younger. It is fun and refreshing. All of the actors are wonderful and the story lines have kept me wanting more. I look forward to watching it every season I will hate to see it go.
If the same writers are doing the spin off then I will definitely be watching.