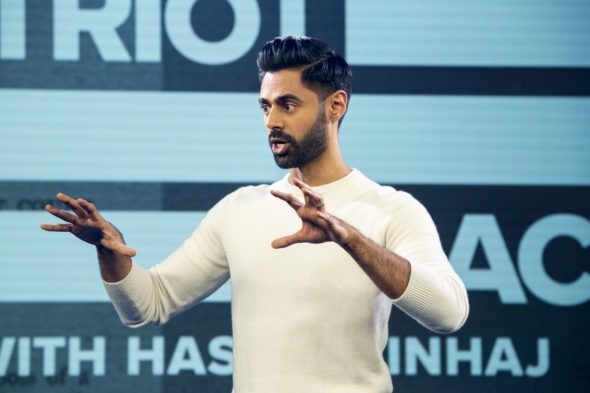 The Patriot Act with Hasan Minhaj TV show won’t be returning with new episodes. The host revealed that the Netflix comedy talk show had been cancelled after six seasons and 40 episodes.

Debuting in 2018, Patriot Act with Hasan Minhaj sought to “explore the modern cultural and political landscape with depth and sincerity” as well as humor. Host Minhaj explored topics like the role of Amazon in the United States economy, America’s continued reliance on oil, immigration policies, free speech and social media, censorship in China, student loans, and drug pricing.

Last year, Patriot Act picked up a Peabody Award, an Emmy Award, and three Webby Awards. The sixth and final season of eight episodes was delayed due to the COVID-10 pandemic. The installments were released between May 17th and June 28th of this year.

Existing episodes will continue to be available for streaming on Netflix. Patriot Act with Hasan Minhaj is the latest in a line of talk shows that have aired and been cancelled on Netflix. They include Chelsea, The Break with Michelle Wolf, and The Joel McHale Show with Joel McHale.

What do you think? Did you enjoy the Patriot Act with Hasan Minhaj TV show? Would you have watched season seven on Netflix?

I absolutely enjoyed this show & was looking forward to the new season! It is a travesty that Patriot Act has been cancelled, especially since it was still great during Covid (without live audience)! With all that is happening now, we need shows like this! It’s almost like Netflix is succumbing to pressures from the extreme Right, or other FAKE NEWS agent(s). This is very upsetting & disappointing, to say the least

Well that stinks! It was a great show. He is similar to John Oliver’s format in that he presents an in depth and thorough discussion of current events, topics of interest geographically, and so much more and does it in a quick, fun and comedic way that at the end, you learn something and enjoy that you have been informed and entertained at the same time! How very short-sighted of Netflix to cancel such an excellent series especially now! 🙁

Did you enjoy the Patriot Act with Hasan Minhaj TV show? Yes, very much!! It was a very unique take on how things work behind the scenes, and with a fascinating dash of Muslim and Indian viewpoints. Plus, Hasan is funny and hip and relevant! I’ll be looking for his next project.

Would you have watched season seven on Netflix? Absolutely, yes!!

I like the show, need to catch up to the latest episodes. Will miss it.