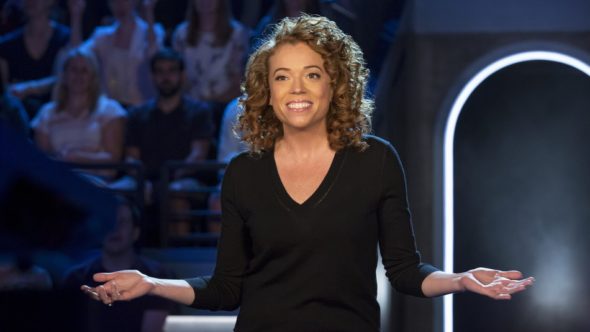 It’s a tough break for comedy on Netflix. According to The Hollywood Reporter, the streaming service has cancelled both The Break with Michelle Wolf and The Joel McHale Show with Joel McHale.

Both comedy series premiered earlier this year. The Break is hosted by former Daily Show correspondent Michelle Wolf and features sketches and satirical commentary related to entertainment and politics.

Meanwhile, The Joel McHale Show with Joel McHale took a comedic look at news and pop culture in the vein of McHale’s cancelled E! TV show, The Soup.

It’s unclear why Netflix has axed both TV shows after only one season. Lack of viewership is likely the reason, but the streaming service does not release ratings.

What do you think? Have you seen The Break and/or The Joel McHale Show with Joel McHale? Do you think Netflix should’ve renewed them?

My wife and I watched both and enjoyed them a lot. Humor is subjective, of course, but we certainly liked the shows and are sorry to see them go.

Watched both shows religiously, so sad to lose them so quickly :,(

I’m not happy about the cancellation of the Joel McHale Show… I love him and his brand of comedy. Netflix made another stupid decision

I’m not surprised by the cancellation of either because they just weren’t very good.

Wolf has the talent to do something of this nature but I think that she tried to force some form of feminism that just put people off, as well as not being of the high standard that she enjoyed on the Daily Show.

I’m sure that Trevor Noah would have her back in a heartbeat because folk are jumping from that ship at an alarming rate.

I did watch and like Joel McHale’s show and made a habit of it every Sunday. But the second season was harder to get through; perhaps because it was all at once instead of every week. I never made it through the first episode of Michelle’s show.

That wasn’t a second season, just additional episodes for the first season. But yeah that show is hilarious and its ridiculous that they keep cancelling the good/ funny ones all the tim, just like on regular tv, so annoying.