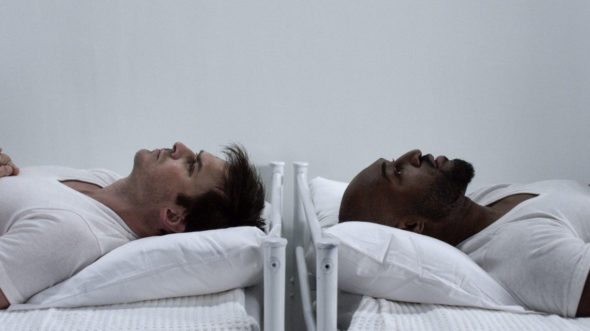 It’s a sad day for supernatural fans. Deadline reports Netflix has cancelled both V Wars and October Faction after only one season.

Based on the comic book of the same name, V Wars follows the story of scientist Dr. Luther Swann (Ian Somerhalder) whose best friend, Michael Fayne (Adrian Holmes), is infected by a mysterious disease. It transforms him into a murderous predator who feeds on other humans. The series debuted in December 2019 and also stars Kyle Harrison Breitkopf, Peter Outerbridge, Michael Greyeyes, Jacky Lai, and Kimberly-Sue Murray.

Meanwhile, October Faction follows “monster hunters Fred (J.C. MacKenzie) and Deloris Allen (Tamara Taylor) who, after the death of Fred’s father, return to their hometown in upstate New York with their teenage children.” The Netflix series debuted in January 2020.

What do you think? Have you seen either October Faction or V Wars? Would you have watched a second season?

I’m so bummed they cancelled V Wars. I don’t watch a lot of tv but loved this show. At least give it one more season to finish the story. Maybe it’ll catch on after the success of Squid Games. It’s worth a shot! Making me want to cancel Netflix with all the cancellations, what’s the point of committing if it just goes away and you’re left hanging?

I loved this show! Don’t understand why Netflix dropped it. Netflix, please reconsider and resurrect it please! I enjoy watching Ian act and have not missed anything he has been involved in. Thank you

My wife loved V-Wars and yes, I really liked it too! Was reluctant to start watching it, but glad she talked me into it. NETFLIX would you please evaluate this show and give it another chance. It got stronger as the season progressed and ended strong and interesting! Thanks!

I would have lived to see a second season. It would have been good if the character Michael hadn’t been killed, as we are led to believe, in the last episode of the season. His character could have carried through into another season I think we’ll as he was changing on that last episode or two of the only season.

I Loved both V-Wars and October Faction and was looking forward to more season. I agree with the person who made a comment about Netflixs canceling good shows and keeping crap. I find myself feeling that way about a lot of stations and programs these days! Hey why not keep some good SyFy stuff for us who like that sort of thing. Seems no one is keeping good syfy, creature feature type shows on anymore!!! 🙁

V-Wars was one of the better shows I’ve seen on there for years. What a shame >:(

I’m so sick of Netflix cancelling good shows, but not the trash shows they leave behind. WTH!!!!!

That sucks! You duck!

I really enjoyed October Faction. I wish they would have continued the show.

I watched both of them and am sad to see they’re both cancelled. What’s the point of even starting shows??

I loved V-Wars! I can’t believe it is canceled.