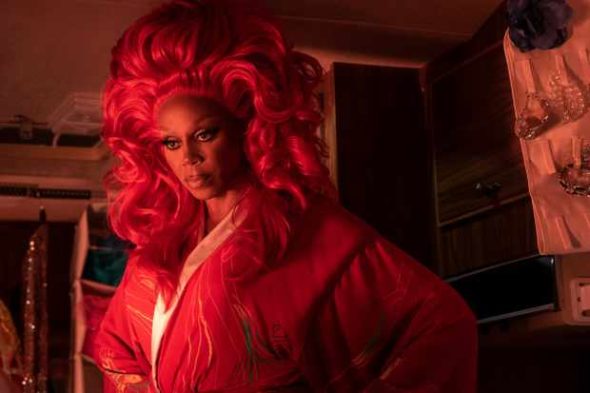 There won’t be a second act for Ruby Red. Netflix has cancelled the AJ and the Queen TV series after one season of 10 episodes.

AJ and the Queen stars RuPaul Charles, Izzy G., Michael-Leon Wooley, Josh Segarra, Katerina Tannenbaum, and Tia Carrere. In the story, Ruby Red (Charles) is a bigger-than-life but down-on-her-luck drag queen. She travels across America from club to club in a rundown 1990’s R/V with her unlikely sidekick AJ (G.), a recently orphaned, tough-talking and scrappy 11-year-old stowaway. As the two misfits — one tall and one small — travel from city to city, Ruby’s message of love and acceptance winds up touching people and changing their lives for the better.

The series was created by Charles and Michael Patrick King, a creator on shows like 2 Broke Girls and The Comeback. The first season of AJ and the Queen was released on January 10th of this year.

Charles broke the news that the show has been cancelled. On Twitter, he wrote, “End of the road for “AJ and The Queen”. Netflix has decided to not extend our road trip across America. Thank you for all the love & support. We’re so very proud of the work.”

End of the road for “AJ and The Queen” @Netflix has decided to not extend our road trip across America. Thank you for all the love & support. We're so very proud of the work. @mizzizzyg @mlwooley @tiacarrere @joshsegarra @katerinavictoria @mwilkas #AJandTheQueen pic.twitter.com/0W50sTW4kU

What do you think? Did you watch the AJ and the Queen TV show? Would you have watched season two on Netflix?

I loved the show and really was s hoping for more episodes!!