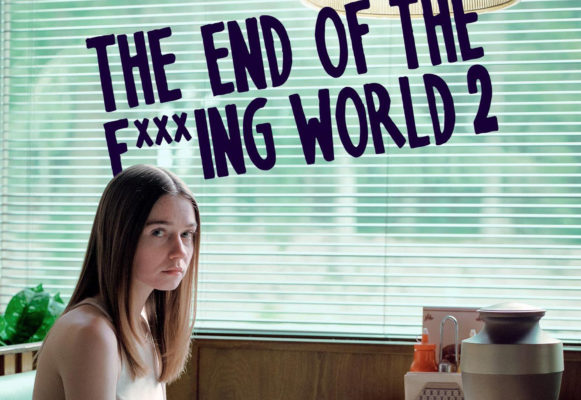 Is it the end of the road for Alyssa and James? Has The End of the F***ing World TV show been cancelled or renewed for a third season on Netflix and Channel 4 in the UK? The television vulture is watching all the latest cancellation and renewal news, so this page is the place to track the status of The End of the F***ing World, season three. Bookmark it, or subscribe for the latest updates. Remember, the television vulture is watching your shows. Are you?

Streaming on the Netflix subscription service in the United States, The End of the F***ing World is based on the graphic novel by Charles Forsman. It stars Jessica Barden, Alex Lawther, Steve Oram, Christine Bottomley, and Naomi Ackie. The action centers on outsiders James (Lawther) and Alyssa (Barden), as they take a road trip to get away from their families and search for Alyssa’s estranged father. At the age of 17, James has decided he is a psychopath and figures he’s ready to move past killing animals. Upon meeting him, uneasy, mercurial Alyssa wonders if she has found her soulmate. Meanwhile, James thinks he may have found his first human victim. They embark on a road trip across England and begin to develop a relationship after a series of mishaps.

Though there hasn’t been an official statement, showrunner Charlie Covell said, “I don’t think you’re going to get another series. I think sometimes it’s good to just stop things and I hope when you see the end you’ll agree. I think you can push things but this feels like an actual end. Sorry.” I’ll update this page with any additional developments. Subscribe for free alerts on The End of the F***ing World cancellation or renewal news.

The End of the F***ing World Cancellation & Renewal Related Links

What do you think? Do you hope The End of the F***ing World TV show will still be renewed for a third season?

I’m so flipping mad that Netflix recommended this show to me because I sat and watched it and fell in love with it just for it to abruptly end on me. Than I find out its been long long long ago cancelled never to return and I’m not done dammit. Why would you end this amazing series when it was seriously just born, it literally hadn’t even left the nest yet, it had so many amazing options, so much beautiful potential. Its as if a writer wanted to play it safe and shut it down there where he new he… Read more »

I know the title is inappropriate, but I’d love to see a third season.