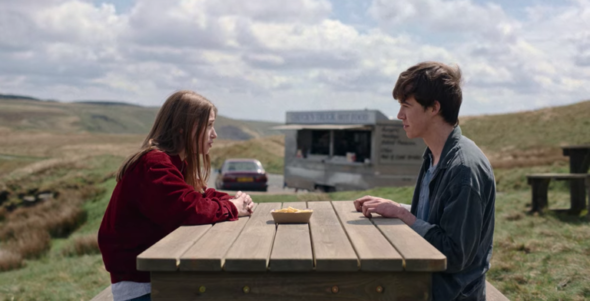 A Channel 4 and Netflix dark comedy series, The End of the F***ing World is based on the graphic novel by Charles Forsman. It stars Jessica Barden, Alex Lawther, Steve Oram, Christine Bottomley, and Naomi Ackie. The action centers on outsiders James (Lawther) and Alyssa (Barden), as they take a road trip to get away from their families and search for Alyssa’s estranged father. At the age of 17, James has decided he is a psychopath and figures he’s ready to move past killing animals. Upon meeting him, uneasy, mercurial Alyssa wonders if she has found her soulmate. Meanwhile, James thinks he may have found his first human victim. They embark on a road trip across England, and begin to develop a relationship after a series of mishaps.

I actually would love a season 3 because season 2 left off on a nice note but it still feels like I am missing something like I still need to watch it like I want to see their new profound love grow that’s all I’m asking.

I think if they can get Frodo from season 1 to return, it could work. James and Alysse, now married, are watching TV when a news break happens. Frodo, who has idolized the pair has entered a business, taking hostages. He will only speak to James and Alyssa, in person, The police will not allow it, but as tactical units surround the building, James and Alyssa attempt to sneak in to prevent a tragedy they feel responsible for. Can they get in without being shot? Can they talk Frodo into surrendering? Can they avoid being arrested for disobeying police? It… Read more »