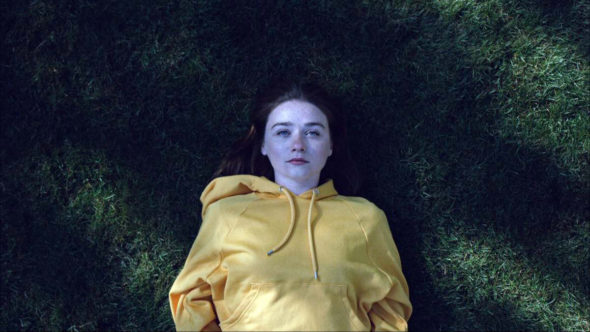 Is it over for James and Alyssa? Has The End of the F***ing World TV show been cancelled or renewed for a second season on Netflix? The television vulture is watching all the latest TV cancellation and renewal news, so this page is the place to track the status of The End of the F***ing World, season two. Bookmark it, or subscribe for the latest updates. Remember, the television vulture is watching your shows. Are you?

Streaming on the Netflix paid subscription platform, The End of the F***ing World stars Jessica Barden, Alex Lawther, Gemma Whelan, Wunmi Mosaku, Steve Oram, Christine Bottomley, Navin Chowdhry, Jayda Mitchell, and Jack Veal. The dark British comedy-drama is based on the Charles S. Forsman comics. The action centers on outsiders James (Lawther) and Alyssa (Barden), as they take a road trip to get away from their families and search for Alyssa’s father, from who she is estranged. At the age of 17, James has decided he is a psychopath and figures he’s ready to move past killing animals. Upon meeting him, uneasy, mercurial Alyssa wonders if she has found her soulmate. Meanwhile, James thinks he may have found his first human victim.

Unless they decide to publicize viewership, it is hard to predict whether Netflix will cancel or renew The End of the F***ing World for season two. The first eight-part season is a co-production between Netflix and UK Channel 4, where it streams on that network’s All 4 on-demand platform. Renewal may partially depend upon the British audience response to the series, although Netflix has rescued orphaned UK TV programs, before. For now, I’ll keep an eye on the trades and update this page with breaking developments. Subscribe for free alerts on The End of the F***ing World cancellation or renewal news.

8/22/18 update: This show has been renewed for a second season on Netflix. Details here.

The End of the F***ing World Cancellation & Renewal Related Links

What do you think? Were you hoping that The End of the F***ing World TV show would be renewed for season two? How would you feel if Netflix and Channel 4 had cancelled this TV series, instead?