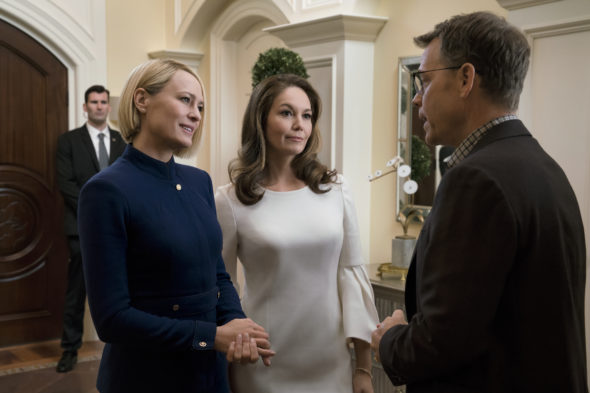 With Frank Underwood gone, can Claire keep her house of cards standing? Has the House of Cards TV show been cancelled or renewed for a seventh season on Netflix? The television vulture is watching all the latest TV cancellation and renewal news, so this page is the place to track the status of House of Cards season seven. Bookmark it, or subscribe for the latest updates. Remember, the television vulture is watching your shows. Are you?

We don’t have to wonder whether Netflix will cancel or renew House of Cards for season seven, since they already decided to end it with the sixth season. In the fall of 2017, when the Spacey scandal peaked and production was shut down, Netflix was mulling over a spin-off with Michael Kelly’s character, Doug Stamper. I’ll keep an eye on the trades to see if anything comes of a sequel series. Subscribe for free updates on any House of Cards news.

What do you think? Should Netflix have cancelled or renewed its House of Cards TV series for a seventh season? Would you have watched another season of TV show without Kevin Spacey?

Netflix made the wrong decision it gives the saddest impression that the show was dependant on make cast. So wrong season 6 was just the real start to really pull us in. 2 more seasons then a spin off about the young underwoods

Success of the show depends on standard of the writing, NOT on presence of Spacey!

Not worth watching without Francis. (my opinion).. He’s a great actor.. But Doug Stamper did keep my interested. let’s face it, he’s a mysterious good guy who is able to do bad things. Get rid of Claire and the show can survive.. and excel..