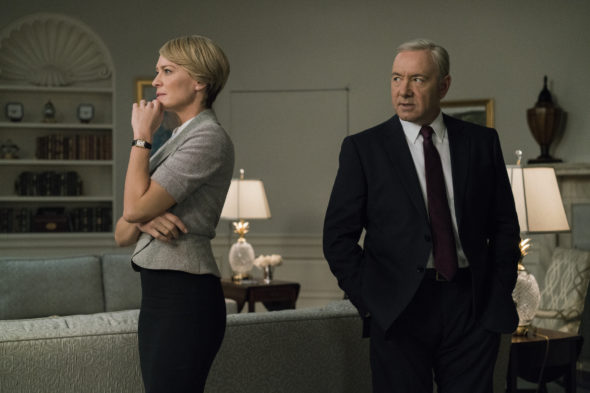 Has the house that Frank Underwood built come tumbling down? Netflix has suspended production on the sixth season of its House of Cards TV show, “until further notice.” Yesterday, in wake of allegations involving star Kevin Spacey, Netflix had announced House of Cards would end with its upcoming sixth season, leaving it effectively cancelled, but with one more installment to come. Now that final chapter seems to be in doubt.

Deadline reports the cast and crew were informed this morning that production would stop on House of Cards season six. Here’s more:

“MRC [Media Rights Capital] and Netflix have decided to suspend production on House of Cards season six, until further notice, to give us time to review the current situation and to address any concerns of our cast and crew,” the two companies said in a joint statement to Deadline.

The Emmy-nominated House of Cards had been in production in Baltimore on its sixth season. Executives from Netflix and MRC arrived in the city Monday “to meet with our cast and crew to ensure that they continue to feel safe and supported” following the allegations against Spacey, who had not been scheduled to be on set yesterday.

The decisions to end the series with season six and to suspend production indefinitely follow allegations made by Star Trek: Discovery actor, Anthony Rabb. Rabb alleges that back in 1986, when he was 14 years old, a then 26 year old Spacey made sexual advances toward him. Although the story and related rumors have reportedly flown around Hollywood for years, BuzzFeed News published an article over the weekend which named Spacey.

What do you think? Are you a House of Cards fan? Should it just end with season five? If it were up to you instead of Netflix, would the House of Cards TV show be cancelled or renewed?

We would like to see season six! Please don’t cancel!!

I wish they could play out the last season and write out or replace Kevin Spacey not fair to the other excellent actors and faithful viewers to just stop the show with no ending.

For the other excellent actors and actresses, I wish there would be a way to finish this last season without Kevin Spacey. If the accusations are true, his career should be over, but there are other people who have put a lot into this series who do not deserved to be punished for the despicable behavior of one.

30 years. Wow! I would keep next season going so Claire’s role can play out!!

Bad timing and bad luck. The “House of cards” has come tumbling down. How the mighty have fallen. Very hard. But with what’s been going on lately in Hollywood, I can’t say I’m all that surprised. If Kevin Spacey was just gay, that I wouldn’t have a problem with. But if the object of your carnal desires is under the age of consent, then I do have to take umbrage. Consenting adults of the same sex? Okay. But engaging in paedophilia, regardless of whether it’s true or not, not okay. You do not use children as sex toys. It is… Read more »

why did mr rapp wait for so many years to report the incident? Is he out to get Mr. Spacey? I smell a rat here.