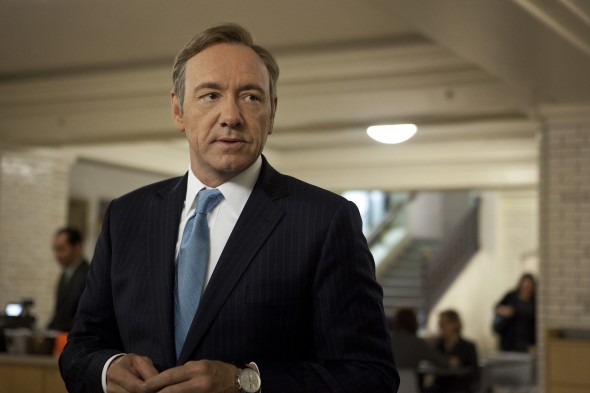 It’s farewell for Frank Underwood. According to The Hollywood Reporter, House of Cards may write out Kevin Spacey for the Netflix series’ sixth and final season.

As reported earlier, season six has been announced as the final season for the political drama. Netflix cancelled the series after sexual misconduct allegations were made against star Kevin Spacey.

Because of the recent scandal, production has been shut down on the new season of House of Cards so the writers can rework the story. Apparently, one option includes writing out Spacey’s character from the season altogether. Netflix has not confirmed this news.

What do you think? Do you watch House of Cards? Would you watch without Frank Underwood?

The show should have ended after season 3. Went on for way too long past it’s fresh date.

Nobody is talking about the best solution to this problem, which is recasting. Robin Wright should know all about it: when she left “Santa Barbara” her role as Kelly Capwell was recast 3 times. Ironically, the actor I feel most suitable to take over is Lane Davies, who played Robin’s brother on SB. Check out old episodes of SB on YouTube and see if you don’t agree.

The story is no long about something 30+ years ago, but a recent event not long ago. So all the accusations are put together and Kevin is no longer the man he was, and on top, some probably dislikes his public announcement of being gay.

But it is sad, how accusations can so easily ruin many peoples life, just because someone shouts he did X, and everybody runs away. Truth is no longer an option, accusations are the truth is seems right now.

I don’t watch the show but I still thinks this is a terrible idea, recasting or removing the lead.

Absolutely ridiculous…ruining a show over something he did 30+ years ago.

It’s not 1 incident from 30 years ago people he currently works with on the show as well as others he as worked with over the last 30 years are also coming forward with complaints of unwanted sexual advances. The show being canceled has nothing to do with the sexual harassment they just happened to have been announced within days of each other.

Kevin Spacey “ruined” the show by his disgusting behavior toward young men and others with whom he has worked, apparently throughout his career. How disappointing for his fans and colleagues on H of C. Imagine working with him, always being uncomfortable and afraid of unwanted comments and advances. I would like the show to finish out its run without him. Robin Wright is an outstanding actor, and there is a very talented cast who can definitely carry the storyline through the final season.