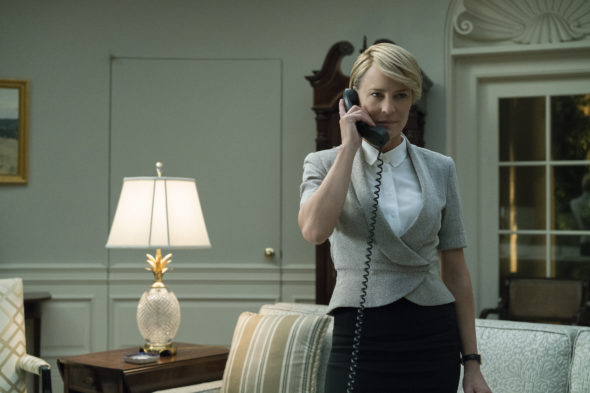 Production for the sixth and final season of the House of Cards TV show on Netflix could resume after Friday, December 8, 2017. Netflix suspended production at the end of October, after news broke of sexual misconduct allegations against Kevin Spacey, who has starred as Frank Underwood since the series’ premiere. Now it looks like the unplanned break may soon come to an end.

In a letter to the HoC team obtained by Deadline, Media Rights Capital SVP of television business and legal affairs, Pauline Micelli expressed appreciation for their patience, indicating that the crew will be paid for an additional two-week hiatus from Nov. 27 through Dec. 8, leading us to believe that production will start after. Even so, nothing has been set in stone.

The Spacey scandal started when Star Trek: Discovery  actor Anthony Rapp accused him of sexual misconduct more than 30 years ago. He has since been accused by filmmaker and actor Tony Montana as well as Mexican actor Roberto Cavazos. UK police are currently investigating new allegations that Spacey sexually assaulted a man in London in 2005.

Read the letter in its entirety below.

As we move into the holidays, we want to express our appreciation for all of the meaningful messages of support we have received from you and want to update all of our loyal cast and crew on our progress and where things currently stand.

We continue to work with Netflix with the hope of resuming production soon. As we continue these discussions, we have determined together that the crew will be paid for an additional two week hiatus – beginning on November 27th and continuing through December 8th.

In addition to the writers, there will be a small contingency of office/accounting staff who will remain in the production office on a continuous basis. Our hope is that the entire crew will be able to reconvene when production resumes, but we want you to know that we will certainly understand if crew members need to find other work in the interim, which will prevent them from re-joining us. We sincerely appreciate all you have done.

Cast and other union members who are not actively working will be paid in accordance with applicable union guidelines through this period and we will be reaching out directly to your representatives to work through the details; we will get to everyone as quickly as possible and appreciate all of your patience here.

These last two months have tested and tried all of us in ways none of us could have foreseen. The one thing we have learned throughout this process is that this production is bigger than just one person and we could not be more proud to be associated with one of the most loyal and talented production cast and crews in this business.

Although there has been talk of killing off or otherwise writing off Spacey’s character, earlier this month, questions arose as to whether or not that was legal, as reportedly, there was no morals clause in Spacey’s contract.

What do you think? Should Spacey’s character be written out? Do you think you’ll still watch the sixth and final season of the House of Cards TV series? Would you watch a Spacey-free spin-off? Let us know, below.

Well, maybe Spacey can’t be fired, but Underwood would surely deserve to get killed off, as he hasn’t refrained from killing off other characters in the storyline himself. So it’s not even difficult to just redirect to replace him in the next season or spinoff series and move on. Especially in this type of drama, it is an “easy” solution. That character sure deserves it! Keep on with Claire, she’s strong enough to keep the series on her shoulders, and I’m sure she can find another partner that is just as suitable if not better.

Sometimes, like when a story and actors pull you into the story, it becomes hard to separate the actors deeds in life with the film characters deeds. Stacey’s actions in life seem to overlap with the character of Pres Underwood’s. I would keep watching the show IF both Underwood’s on the show were outed to the media and the show could demonstrate a conclusion that stimulated a discussion on the need for moral characters in our polititions. I do believe power corrupts completely so that many give up on trying to maintain morality.

They should just cancel the show and be done with it.

It’s not a morality issue. Nobody cares that he is gay. It’s a legal issue. Kevin Stacy sexually assaulted multiple men. He should step down and beg for forgiveness. Then spend the rest of his rappist ass in prison. View from a rape survivor.