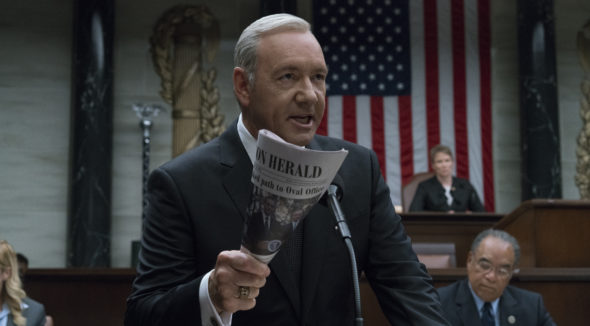 In the wake of allegations that, in 1986, Kevin Spacey made unwanted sexual advances against a then 14-year-old Anthony Rapp, Netflix has announced its House of Cards TV show will end with the upcoming sixth season. Rapp, who currently stars in Star Trek: Discovery on CBS All Access, made the allegations to BuzzFeed News, in an interview which was published over the weekend.

As allegations of unwanted sexual advances in 1986 by Kevin Spacey against a then teenage Anthony Rapp have emerged, Netflix today has decided to pull the plug on House of Cards after the upcoming sixth season.

Coming just over 12-hours after the Star Trek Discovery star first made public his allegations on October 29 of what happened at a party at Spacey’s NYC apartment back in the mid-1980s, the streaming service

Late Sunday, Rapp claimed that then 26-year old Stacey drunkenly put the then 14-year old on a bed to “seduce” him. “I was aware that he was trying to get with me sexually,” Rapp said last night of the 1986 incident when the Stacey and he were both on Broadway in a revival of Long Day’s Journey Into Night and Precious Sons respectively.

Shortly afterwards, an apologetic Stacey issued a statement on social media saying he “did not remember the encounter” but added he was “horrified” by what Rapp described. “If I did behave then as he describes, I owe him the sincerest apology for what would have been deeply inappropriate drunken behavior,” Stacey also said.

In also using the occasion to seemingly shift focus in announcing publicly that he had “choose now to live as a gay man,” The American Beauty star drew harsh rebukes swiftly online and otherwise. As for Rapp himself, the actor said on Twitter after Spacey’s apology and announcement that he had “no further comment ..at this time.”

As the Harvey Weinstein sexual harassment and sexual assault scandal continues to grow and Hollywood begins to take a stricter line in such matters, these claims against Stacey also come as the Emmy nominated House of Cards is currently in production in Maryland on its sixth season. In what has been a career-defining and critically praised role for the Oscar nominee, Stacey plays the manipulative and murderous now ex-President Francis Underwood in the Robin Wright co-starring series. Season 5 of the show ended with Wright’s Claire Underwood now in the Oval Office as America’s first female POTUS as Spacey’s Frank Underwood resigned in disgrace.

Having truly launched off Netflix’s explosion of original programming back in 2013, the David Fincher EP’d House of Cards was created by Willimon and based on the 1990 BBC series from Michael Dobbs novel of the same name. Season 6 of House of Cards is expected to debut next year on Netflix.

What do you think? Once the news about Spacey broke, did you expect Netflix to end its House of Cards TV series?

Wish there had been more comments here. As it relates to allegations, I would like to see the series continued. I believe some networks jump the gun in panic when alleged allegations become public.

Stupid over reaction. Finish production! Our legal process is not “guilty by allegation”. His lawyers should face this, he should keep working.

I AGREE, although if more than one allegation surfaced, I might not feel the same way. Mr. Spacey is a great actor, and was quick to reply and apologize if he had “drunkenly” done such a thing. As far as I can determine, there have not been any other such accusations. It is a very well-done drama that skewers our political system, and I would like for it to continue.

What is troubling how is an allegation from a person for an event that occurred three decades ago with no other evidence can ruin another person’s career. Are we back to mobs with pitchforks? Where’s the due process of innocent until proven guilty?

True that. People are a mob. And a mob needs blood and circus.

So we now hang a great show and actor before court? Wow – a great show shot down before a court date. KS said he did not remember 3 decades ago and it took this long? So the knee jerk reaction of BummerWood is to hang everyone. Like nobody knew anything was going on with HW. Seems everyone jumped on a wagon only because he was caught – not because he was. On KS three decades? Come on. At least filter it out and go to court before you nix a great show – Nexflix lost me.

Guaranteed this was already decided before the allegations. The shows been treading water the last 2 seasons. Needs to end and show the downfall.

So let me get this straight. Because of the criminal actions of a drunken pedophile, other actors have to suffer and lose their jobs, and an otherwise good show has to be canned. How about fire Spacey and replace him, and keep a good thing going?

Recasting the lead actor in a TV show is a terrible idea, regardless of what that actor did.

And each of these shows suck now. Most of the time if that happens I stop watching the show

I do not know what Spacey was thinking or doing but I will be crushed if this show was cancelled.

I thought that they are ending the show because he just came out of the closet. Amazing that he did this and they want to end the show. Sounds like he is getting a bad RAPP. I hope he didn’t do what this guy is accusing him of.

I’m not saying what Spacey did was right, but even he is not sure it happened. So is that all it takes in Hollywood to ruin someone’s career? Someone just had to say something happened to them when they were 14 and then he’s picked apart? Rapp is gay. Who knows if he came on to a drunk Spacey? 14 year olds can be start struck you know. I mean, to destroy a man’s career, not to mention put so many actors out of work, over unfounded allegations over 30 years ago, is wicked. But that’s what’s going on now.… Read more »

Many people will disagree with you. But, I see where ya coming from. I haven’t seen my family in 10 years and honestly, I don’t remember my own mother’s face. I would not recognize her even if I saw her & maybe I did at some point. That being said, he may have lied, but I’m inclined to give him the benefit of the doubt.