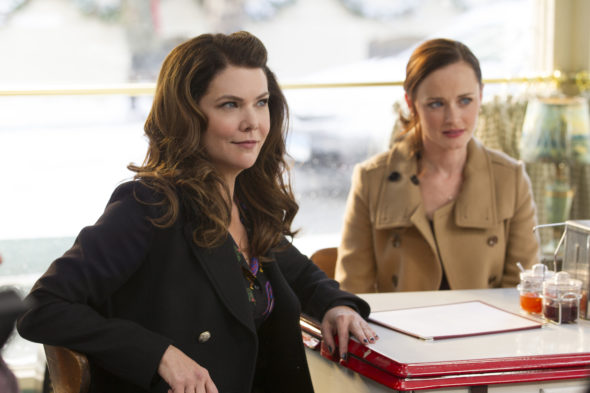 Will there be more Gilmore Girls? Recently, creators Amy Sherman-Palladino and Daniel Palladino spoke with The Hollywood Reporter about the possibility of another Netflix revival.

Currently, the Palladinos are working on a new show for Amazon, The Marvelous Mrs. Maisel. Set in the 1950s, the dramedy follows  Miriam “Midge” Maisel (Rachel Brosnahan), a mother who takes up stand-up comedy after her husband leaves her.

In the interview, the Palladinos said there isn’t another Gilmore Girls revival planned as of now,but they have a clause in their contract with Amazon that would allow them to make more if the mood strikes:

We’ve got the Gilmore clause, we’ve carved it out. (Laughs.) The thing about Gilmore Girls is, it’s an amorphous thing. The reason that it happened the first time is because we all went to that Austin [ATX] Festival and we all sat together and there was an open bar and we were all sitting there saying, “It feels good now, let’s do it now.” I think it would have to be a similar situation. There would have to be an open bar and we would have to have the right story and the right format and it would have to be a time where the girls and us all felt like, ‘Yeah, let’s dive in again.’ There’s nothing being planned right now but it’s open if the muse strikes.”

The Marvelous Mrs. Maisel premieres on Amazon on November 29th.

What do you think? Are you a fan of Gilmore Girls? Would you watch another revival?